Jim saves the day - For Real!

We almost had a Spirit Jim, Spirit Renee and Spirit Wyatt Ray !

They were almost swept away in a flash flood from a river in Texas!!!  Maybe one of them can tell their story here.  But it sounds like Jim saved them all through some miracle.  (I don’t care if I embarrass you Jim! You deserve a big hug for you superman powers!)

So, I just want to say I am so happy they are safe!  They are pretty shook up, but safe.

Oh my gosh there were definitely some Tripawd Angels watching over them! So glad that everyone is safe.

I saw that this AM on Facebook…after I had answered just a nice calm email that must have been BEFORE the waters of hell desended on their heads….I cannot believe how lucky they were and kudos to Jim and the fact that God was surely watching over them and that latch!!

jim
On The Road

Aw shucks… a real hero would have gone back down to the park and helped others who couldn’t tow their trailers out. But leaving in such a panic, I apparently bent our hitch. We were lucky to get out of there at all, and consider ourselves extremely fortunate.

Yes, it got pretty scary. It’s really amazing how quickly the water rises in these parts. Just a few hours earlier we had walked across a spillway path over to an island on the lazy Guadalupe river while staying at an RV park called “By The River” … the name should have been a hint. We were put at the end of the park which the manager later told us “always floods first.”

When he showed up at about 10:00 p.m., he only suggested we “may want to hitch up and be prepared to leave” – a high water advisory was in effect until midnight. I figured we had plenty of time and decided to dump our sewer, not knowing where we might be in the morning. While doing so, I walked over to the river bank and noticed it was much closer The water was about 8′ higher than it was, and only about 5′ lower than our site. I poked my head in the trailer and told Rene, “Uhh… we might just want to leave now. Come check this out!”

Our pace hastened, we disconnected our power and water, and proceeded to get going. That’s when we heard the sirens, saw the fire truck  and noticed emergency personnel suggesting we hurry up. A look over their shoulder showed the water about another two feet higher. Everything was fine, it was pretty exciting, but that was it. Then we couldn’t hitch up.

This is when it really got scary. Multiple attempts to connect the trailer resulted only in a frightening clunk. Each time I jumped out to adjust the legs of the trailer up or down, there were more volunteers trying to help. One wearing a safety vest and helmet, diligently tried to calm down Rene. Another tried to assist me by holding our hitch plate level. Clunk. I panicked and tried to force the hook up.

That’s how I pushed the trailer legs off their blocks, causing the fifth wheel kingpin box to slam down on top of our truck bed rails. Doing my best to remain calm, it was clearly time to poop my pants. But no time for that. I wasn’t leaving without our home. The water was another foot higher. I raised the trailer, pulled out from under it and started dismantling our hitch. I think that’s when Rene really started freaking out.

Deathly afraid that the hitch was broken, I confirmed it was functional and put it back together. One last attempt after adjusting the trailer height again – with the park manager holding the hitch, and me holding my breath – we connected, but it didn’t feel like it. I knew something was wrong. The manager insisted he heard it click, and he must have. I was clearly out of my mind and the water was another foot hgher. We were on our way, just in time.

We joined dozens of other RVers up the hill in a church parking lot for the night. Walking down to survey the damage this morning, I noticed our site had clearly been under at least a couple feet of water. All the trailers did get out. Others upstream were less fortunate. (A couple people are still missing last we heard.) We consider ourselves very fortunate. Did I mention that? Jerry was looking out for us indeed.

Epilogue: As we pulled away this morning I noticed a trailer tire was low. Pulling away in hopes that we would find a service station soon, we immediately pulled into a tire shop right across the road. We had two punctured tires. When it rains it pours. Especially in Texas.

The Jim Part of Jim and Rene
Tripawds: Behind the Scenes
Join Team Agreda for Total Wellness and Prosperity!

Wyatt Ray Dawg
Wherever the Wind Takes Me, Dude

I heard my Mom say that I “proved myself last night.” When Mom and Dad were running around trying to get us out of there, I don’t know why but I just didn’t feel like doing my crazy antics. It wasn’t any fun, seeing how upset they were. So I was pretty quiet in the truck while Dad tried to hook up the trailer. Later that night I cuddled with them on the couch bed and was just really happy that we were all together.

We all had such a terrible time last night in the rain. When it was over, I was just glad to still have my new family and my doghouse on wheels.

I guess this means that I grew up a little last night, don’t you think?

Read all about my adventures at my Tripawds Blog

Hmmmmmm…..did someone steal your account, Wyatt?  I think I hear a little wishful thinking in there 🙂  Scary stuff!!!  Did they ever find the missing people?  Its amazing how fast things can change…

Oh, gee guys.  I really hate Texas isn’t being very hospitable. That is so unlike us!  Glad you’re safe, and all is well.  Jerry still watches over you 🙂

Oh I’m scared all over again….I felt like I was there with the water lapping at my life….

Oh my!  That is very, very scary!  Flash floods are no joke!  The minute by minute details really show just how lucky you were!  No wonder Rene was losing it! You guys have some serious guardian angels, not to mention some great help from strangers!

Really in the big scheme of things, the punctured tires seem not so bad!

Wyatt – I always think you are wonderful.  The crazy side is just for attention because you missed out on so much of it as a baby.  When the chips are down, you are a trooper and your true colors come out!   I know in my heart you are going to be the best dog in the world once the puppy phase if over.

OMG! I just read all the posts! How freaken scary that must have been.

I am sooooo happy that you all made it out OK… What would we do without our Tripawds leaders???!!!!

I know that Jerry was looking out for all 3 of you… Thank God!!!

But I’m so worried about the people you mentioned that were missing. Have they been found yet?

Wyatt! Duuuuude! What a good dawg to show such fortitude when the going was ruff! We knew you had it in you buddy! Your dad is truly a hero for saving you and Rene!

All of us here in Oaktown are ever so grateful ya’ll are safe and sound. What a scary scene! Stay outta the floodplain for awhile OK? Nice place to park your rig but not when its dumping rain

Here’s hoping the truck and rig are OK and moveable! Let us know if we can do anything OK?

Travis Ray and the Oaktown Pack

Just wanted to provide a quick update … will try to post a few more pictures soon. But this will give you an idea of where we were staying, and why we were so freaked out. 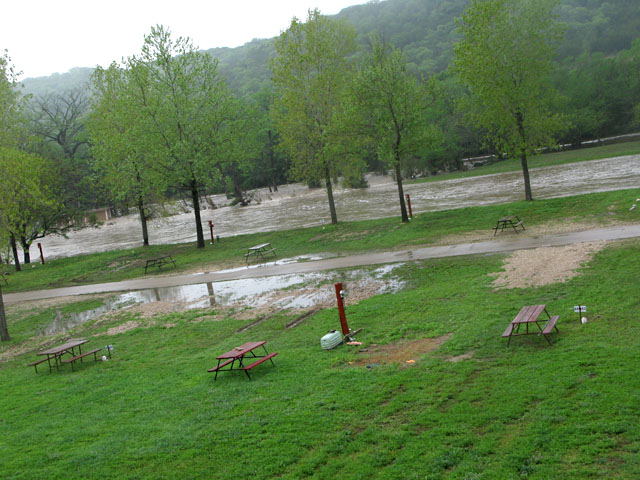 There is still one person missing from the few that got washed away trying to cross the river in their cars further upstream. Another swam to shore and one more spent a couple hours in a tree after trying reach dry ground.

We are very fortunate indeed, and are now safe at a park down the road a bit called “Top of the Hill”. The hith and truck appear to be OK. Nothing a few whacks with a hammer wouldn’t fix. Plenty of rain remains in ther forecast.

“Well dark clouds are rollin’ in. Man I’m standin’ out in the rain.

WOW!  That is raging still!

I know you you guys don’t watch TV but there is a series called “I Shouldn’t Be Alive”.   It always gets me to thinking about the strangest events that can change your life in an instance.

Of course with age those type of TV shows makes me realize how stupid we were as kids!  I used to drive 110-115mph to highschool on a dirt road!  (that’s the fastest I could get my car)  Now, I’m the slow person driving that people want to flip off!

I saw there was still an 80% chance of heavy rain.   Now you got me checking the forecast too!

Gosh, so that is what they mean by “Flash flood”. Scary! Thank dogness you three got out safely. The names “by the river” and “top of the hill” sound so innocent but I guess I know where you will try to pitch camp next time

Yay Wyatt. You were such a cool cat when things got tuff.