We dropped Wolfie off around 7 am yesterday morning here is a pic of the three of us at the vets, he looks like he is smiling 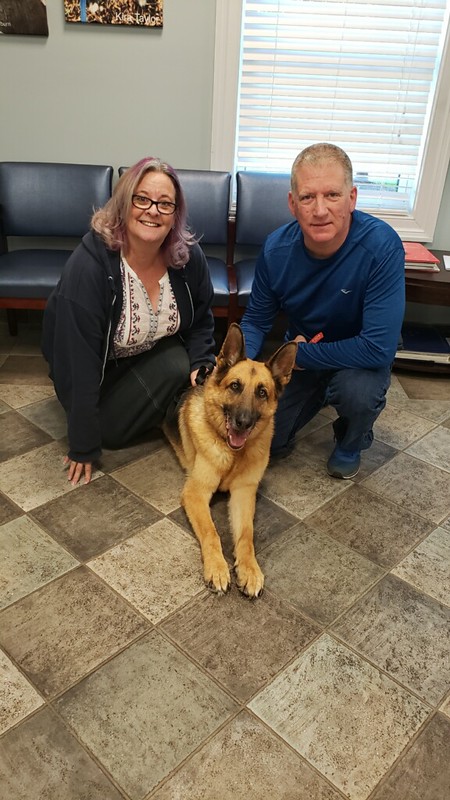 We heard around 3 pm that he was out of surgery and recovering, funny thing I was ok leaving him at the vet where my husband had a hard time then but when we heard he was done and recovering is when I lost it at work!!

The doc said the tumor was larger then they first thought but felt he got good margins, they have sent it to pathology so we will now more next week.

We are planning on picking him up today and will find out later this morning.

I will update with more info later today

We just found out he is not coming home today, his incision is still bleeding a bit and he is badly bruised so they want to keep him another day.

Good news is he is getting up on his own and had a bit of breakfast this morning.

I know it is hard to be away from him but he is right where he needs to be right now. Bruising is normal, leakage around the incision area is normal too. You are going to have your hands full once he gets home so get some rest while you can

Love that picture of the three of you, he DOES look like he is smiling!

Hang in there, I know how hard it is right now to be patient. Will they let you visit with him for a bit?

Yayyy Wolfie! OMD I am so in love with him!

Glad to hear surgery day is over and he’s on his way home. Drop us a line when you get a chance, we want to know how he is doing.

Stay strong, Wolfie needs you to Be More Dog 🙂

Alrighty, surgery is done and recovery  is started!  Good job Wolfie!!   And not unusual at all for a dog to spend two or more nights  at the clinic.  Glad your Vets are so proactive  and making sure everything  gets nice and stable for the homecoming.

Get some rest yourselves, okay?  Wolfie  is all druggy and seeing a few pink elephants!