It is odd that she still wanted to go outside but then stopped cold as soon as she did. Sometimes deciphering dog behavior is so tough. I guess the key would be to just follow her lead and play it by ear as long as everything else is normal. Keep us posted and give her extra smooches from us!

Hi everyone, I has been a few weeks since my last update, and we now find ourselves in a new year. First off, happy new year to all the Tripawd community! Thank you all for the support, advice, and encouragement.

In terms of update, Maddie is still doing well. She was supposed to have her last round of chemo on December 22, but she had other ideas. Her blood count levels were too low that day so we had to postpone the treatment by a couple weeks. They wanted to only wait one week, but we had plans to be gone for a few days around the new year. I was disappointed about the delay, as I was really REALLY looking forward to leaving chemo behind in 2020. But on the other hand, it was lovely to have Maddie feeling really good for Christmas, rather than her usual post-chemo crappy.

She had her fourth and last round of chemo a week ago, January 5! Yay! To celebrate, Jeremy and I opened a bottle of Three-Legged Red wine (you know, cause I have my own three-legged red dog) and Maddie got a burger. Despite having no appetite for other things for the next 24 hours after, she was more than happy to eat that burger. (https://i.imgur…..wraNZW.mp4)

All in all she recovered from this round of chemo better and more quickly than the first three. She had all the same post-treatment/sedation symptoms (except for the urine dribbling — there was none this time), but she progressed through them all more quickly. Per usual, she was groggy and had a hard time truly relaxing, but instead of being like that all afternoon and evening, she was through that after a couple hours and then crashed and was very relaxed all evening. Instead of taking about two and a half days to be back to eating normally, it was about one and half days this time. It was just all around better.

The treatment plan going forward is to start metronomic chemo in a few weeks and, presuming she tolerates it well, keep her on that. We are trying to make sure our decisions for her treatment are focused on maximizing her quality of life, so we won’t continue metronomic if it makes her feel like crap all the time. Or if something in her condition changes, we’ll reevaluate. She’ll also get xrays of her lungs every couple months.

But now onto the non-medical update. She is doing well. She is happy, cheerful, stubborn, playful, comfortable, awkward, curious, demanding, etc. She is all the things she was before cancer and before amputation. Just one less leg.

For Christmas we got her an antler to chew on. When Maddie had two front legs, she always held chewing toys between her paws, usually so they would stand up for optimal chewing. I was curious how she’d handle it now, when she doesn’t have two paws to hold it up between. Well it turns out I unintentionally got a different style of antler and it was exactly the right kind. When I’ve ordered them in the past, I’ve received thick cylinder cuts of antler, but this time an entire antler showed up. It ended up being perfect for her new body — since the antler has a natural curve to it, she was able to plant her front paw in the middle and have antler stand up on either side of her paw for optimal chewing. 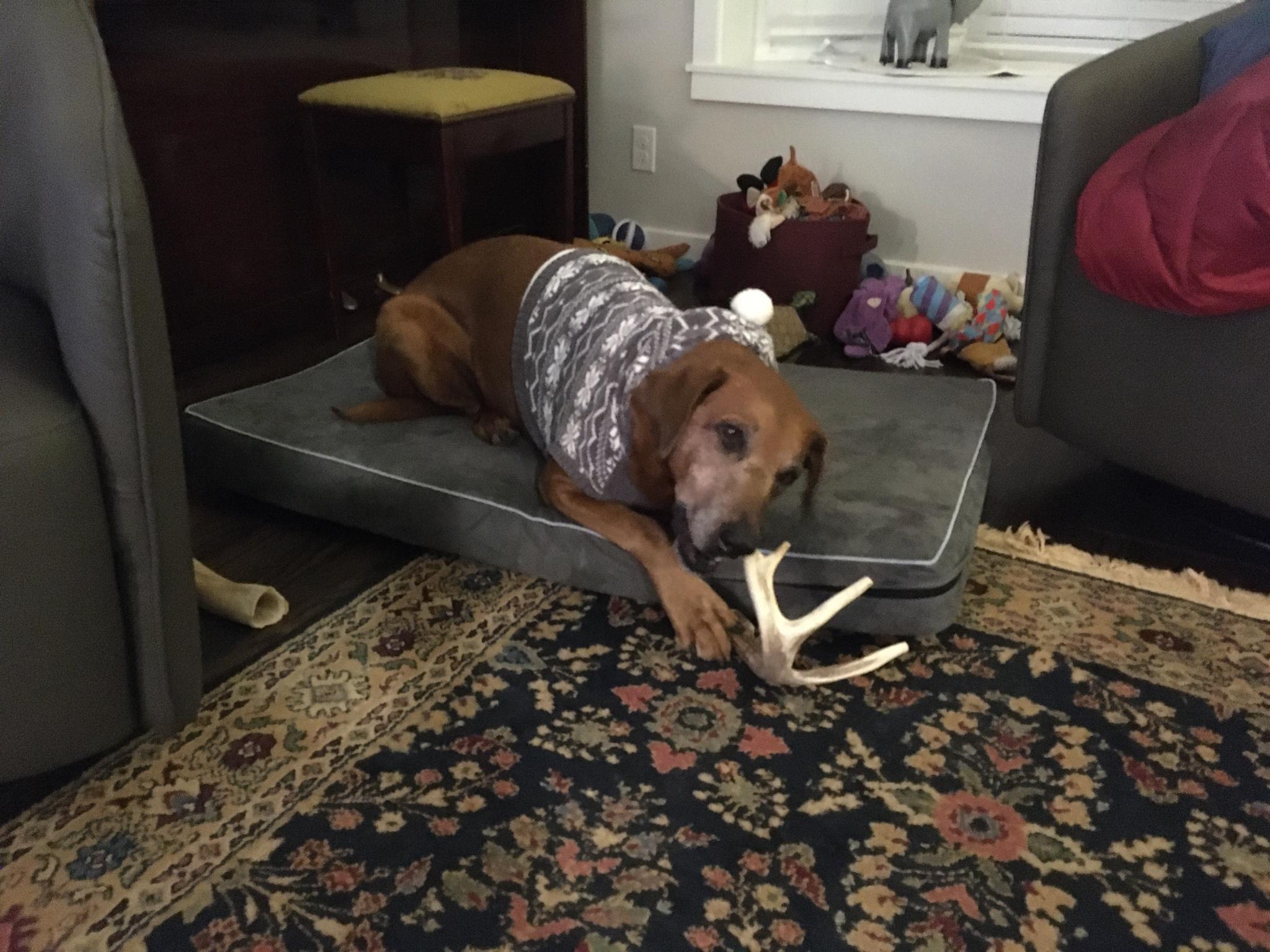 As I mentioned above, we went away for a couple days and borrowed a vacation place our friends have near the beach. (For those not from Western Washington, what we call “beach” is really just a bunch of rocks with rough sand big enough to almost be small rocks… :-)) Anyway, we had a great time: relaxed around the house, played lots of backgammon, walked down to the beach. 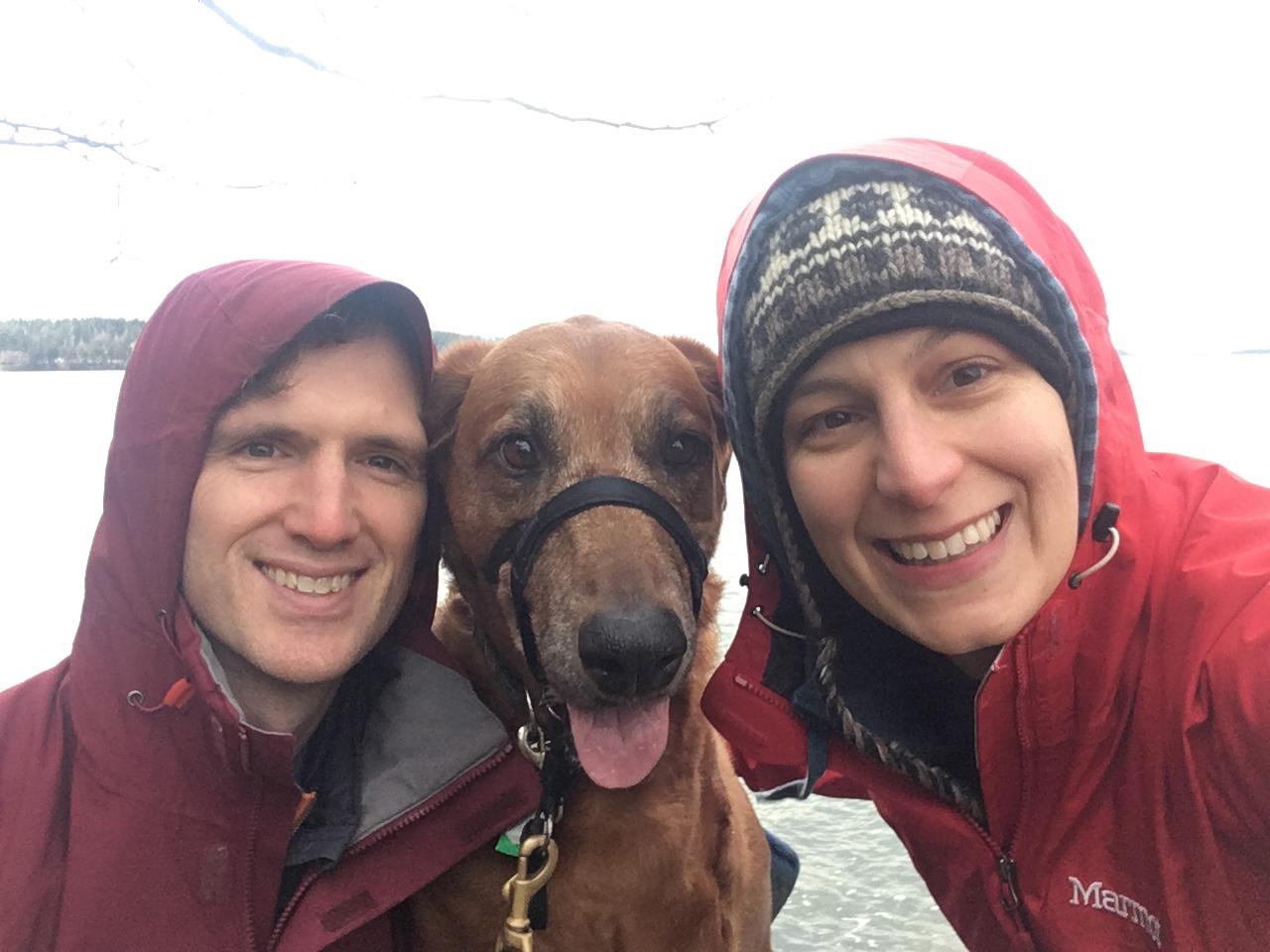 Here Maddie is, running down to the beach access: https://i.imgur…..UTAcTm.mp4

I was hoping to have Maddie roam the beach on a long leash, sniffing and exploring, but unfortunately the tide schedule was not in our favor so there was almost no beach. That didn’t stop her from climbing over these logs like a boss! I was amazed at how well she was able to maneuver her body, turn around, etc., all while on such uneven surfaces. https://i.imgur…..YqLoKc.mp4

A couple days ago I took her to a off-leash beach area near home. It was a gorgeous day and the Olympic mountains were looking quite dramatic. 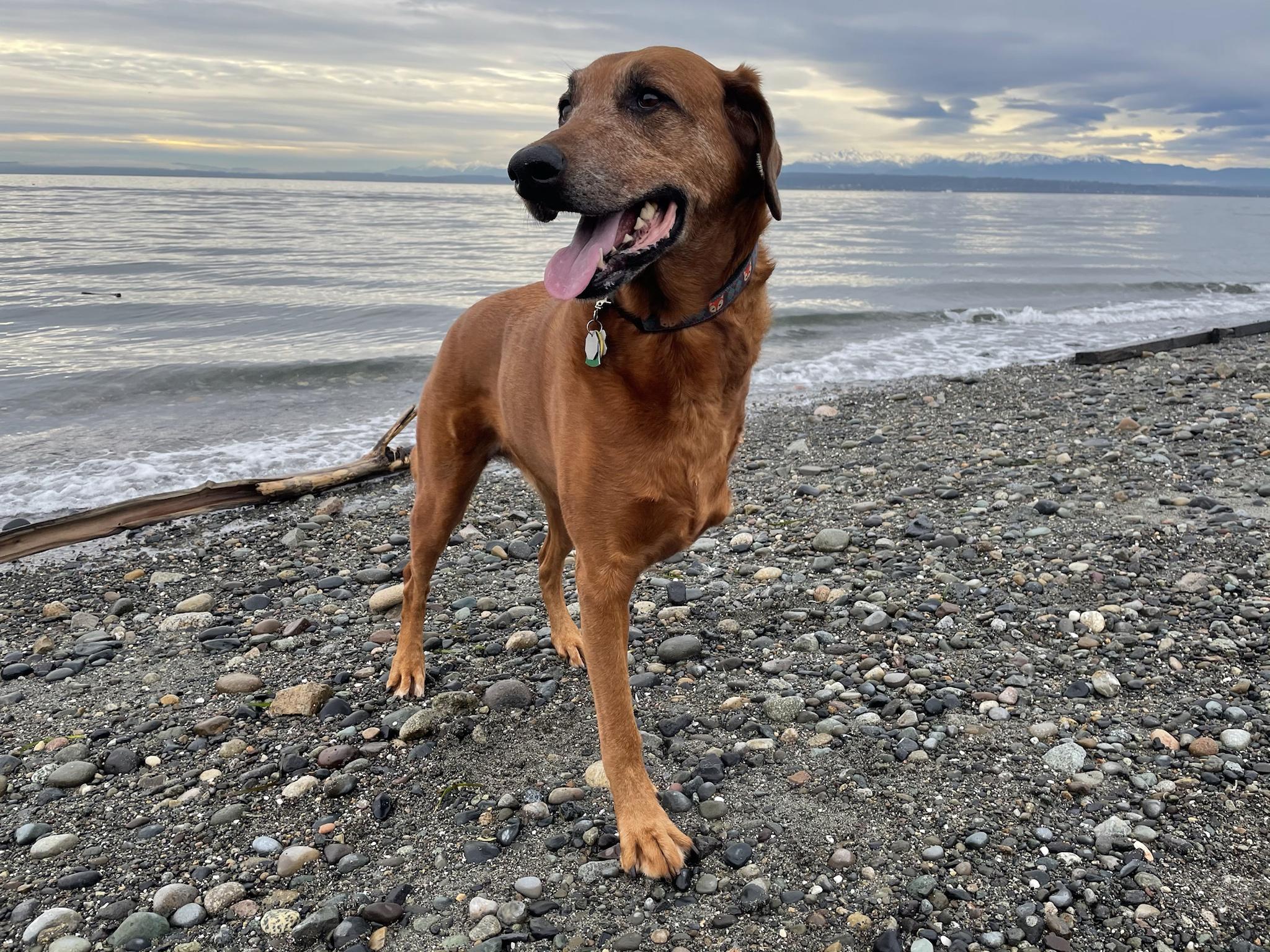 She had a great time, went further than previous visits, and then had a solid nap.

You think she looks comfortable? 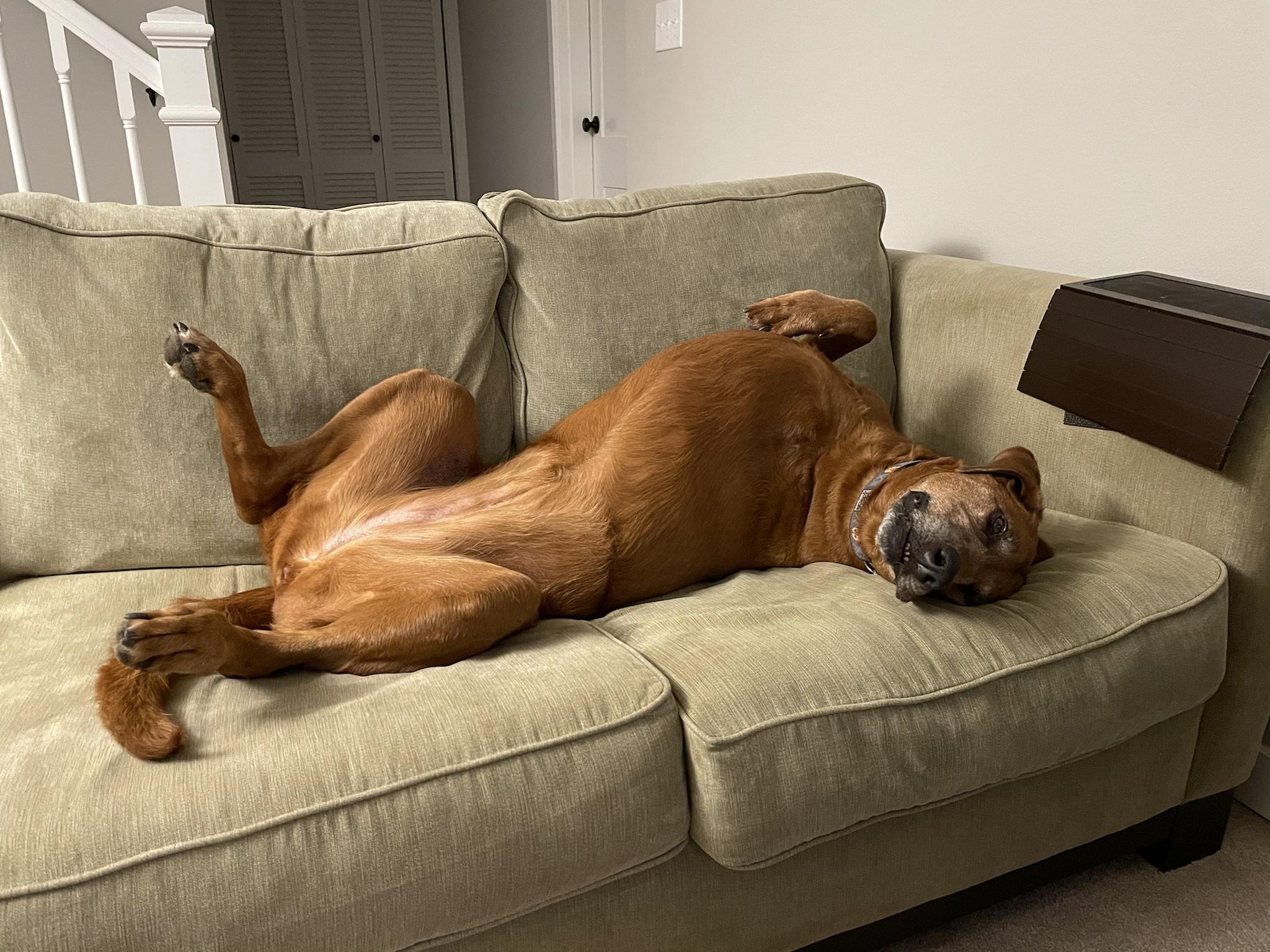 YEAH! This is just the best way to end my day, I’m smiling big time and so thrilled for all of you. What an amazing, wonderful time you’ve had just enjoying your sweet girl and having fun on adventures. How beautiful to see her getting back to being Maddie. Thank you for letting us be part of it.

That beach time looks so pretty! We have friends who live in Copalis Beach, WA, it looks so much like where you guys went. Just gorgeous.

Would you mind if I put a Maddie pic or two in our gallery? She’s priceless!

Chemo is done!!!   Three-legged Wine for you and a burger for Maddie…..and a beach trip for everyone!  Great way to celebrate!!🍷🍔.👏👏👏

Seeing the pictures and video put a great big grin on my face😁   It is so much fun watch dogs figure out how to chew their bones.  Nothing holds Tripawds back!

Maddie cert is polite and display great restraint  and manners when eating her burger.  Such a good girl😘

And reclaiming  their couch for a good back scratch and nap….YAY!!

Thanks for the great update.  This is why we do what we do.

Hugs Sally and Alumni Happy Hannah and Merry Myrtle and Frankie too!

Would you mind if I put a Maddie pic or two in our gallery? She’s priceless!

Sure thing — let me know if you want originally sized files if what I have up here isn’t as hi res as they could be.

Sure thing — let me know if you want originally sized files if what I have up here isn’t as hi res as they could be.

Sure! Email me when you get a chance, I’d love to share them, she is spectacular!

By the way, Three Legged Red is our all-time favorite, it’s so special to us.

I feel like I’m missing something obvious on the site haha — where can I find your email?

Also I just finished watching the video about the wine review. Gave me a good chuckle ha!

Oh doh! I forgot to include my email link.

Hee hee thanks for watching the video. We remember that day like it was yesterday. Well, kinda. It was a magnum after all!

Hee hee thanks for watching the video. We remember that day like it was yesterday. Well, kinda. It was a magnum after all!

Definitely laughed out at that.

Weird, I didn’t get that email. Can you try sending again?