I’m not sure where to start with this post. Hi, I’m Kaite and I have a 4 year old retired racing greyhound named Kylie. Kylie is the sassiest, snarkiest, brattiest dog you’ll ever meet and I absolutely love her to pieces. Our spunk pairs perfectly together and she’s been the best friend I could have asked for since I adopted her in May 2017.

Her tripawd journey began on July 30th. I was dogsitting for some friends and had brought Kylie with me so she could hang out with her greyhound friends (all 5 of them!) and enjoy the fenced yard.

The first morning, I had a few of the dogs out to potty. I watched Kylie dance around the yard from inside the house before eventually going outside to call her and her friends in so I could leave for work. Her friends came in as soon as I opened the door. I went out to the deck to call for Kylie, she was in the far corner of the yard. When I said her name, she looked at me and put on her crazy face—her “I’m going to run faster than I ever have before” face. She made a beeline for the door at top speed. I heard a loud CRACK and she screamed. This moment is forever impressed in my mind.

When I got to her, I saw her foot dangling from her leg. My stomach sunk. When we got to the vet, I found out Kylie had broken all four of the metatarsals in her back left foot. The best course of action, the vet said, was to have an orthopedic surgeon operate and place plates to stabilize the injury. That would cost thousands of dollars. The next best option was to operate in office and stabilize using splints. We decided to have our vet operate.

Kylie came out of surgery just fine and went home with a cool purple cast that same day. She would have to go back to the vet weekly for laser treatments and bandage rewraps for the next 6-8 weeks until she was fully healed, but we felt like the worst was behind us. She went back to the vet later that week for her first rewrap and laser therapy treatment. The vet told us everything was looking good and the bones weren’t shifting. We felt cautiously optimistic, but knew we had a long 8 weeks ahead of us.

Two days later, her cast began to look a little dirty. At first we didn’t think much of it—we thought it might just be fuzzies from the carpet or dog bed stuck to the bandages. Later that night, though, her leg began to stink. We could smell her from across the room. I texted our vet who suggested we bring her in the next morning just to be safe.

I got a call not too long after Kylie had been dropped off: the tissue around her fractures had died and there was no hope of the foot healing. Our only option was to amputate. She went in for surgery that same day, August 7th, just 8 days after her injury.

Kylie has taught us so much about perseverance and overcoming obstacles with grace over the last few months. We’re so glad to still have her by our side and back to her old shenanigans (she’s really milking this three legged thing!). My boyfriend now willingly sleeps on the couch when she’s stolen his spot in bed, I gladly spend hours on the floor petting her when she whines, and we savor every moment we have with her.

I’m not exactly new here, I’ve been lurking since her injury. It’s been a little hard for us to find a community that can relate to our experiences and our new reality. Many of the stories we hear and the people we meet have had dogs lose limbs to cancer—very rarely have we met someone who’s dealt with injury and amputation. After Kylie’s amputation, I scoured the forums here looking for someone who could give us insight. I felt alone and like I’d failed Kylie as her dog parent. It’s taken me months to set aside the what ifs—what if Kylie just hadn’t come when I’d called? What if I hadn’t taken her with me to dogsit? What if we’d gone to an orthopedic surgeon? What if I’d be more of a stickler while she was in her splint? Would any of it have helped?

I’ve learned that none of that matters. Kylie is happy and healthy and still an absolute diva. Three legs or four, she’s living her best life and is eager to have us by her side. She refuses to let anything hold her back.

So that’s her story in a nutshell! Kylie also has a blog and you can read her more detailed post about the injury, amputation, and recovery here: https://www.rpr…..-you-lemon

It’s nice to finally be out of the shadows and I look forward to getting to know all of you!

Kaite, welcome. We are so glad you decided to chime in and share Kylie’s story. You’re right, it’s not often we meet a Greyhound who lost a leg to something other than osteosarcoma, so your story is much appreciated and adds to the fabric of this community. Somewhere, some day, someone will look for comfort because their pup is in the same situation. So thank you from all of us.

Kylie sounds like she’s got tons of spunk! What a sweet girl. I loved the blog post she wrote! 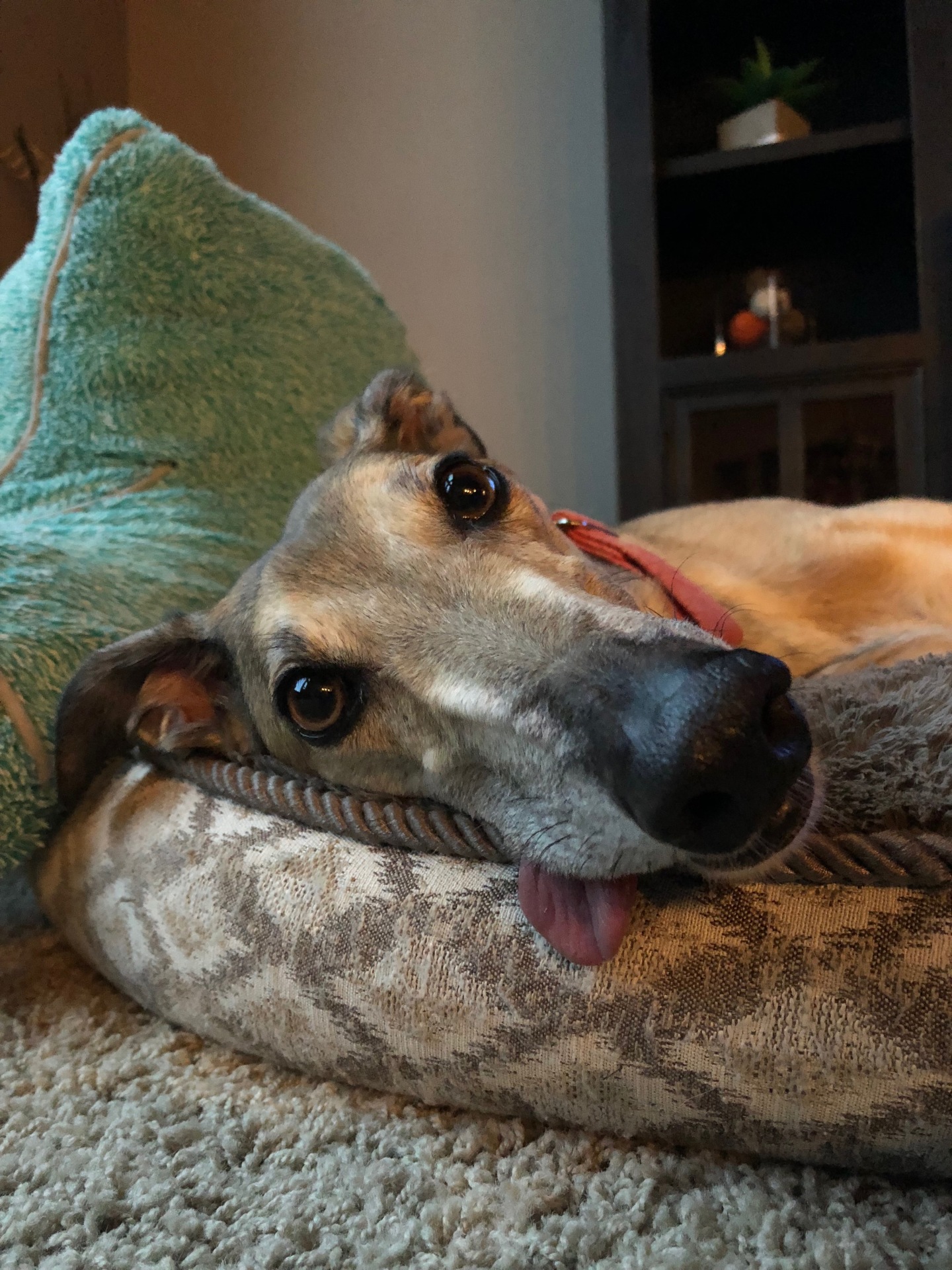 And I’ll bet she and Stewie the Hedgehog Hound of British Columbia would get along great! 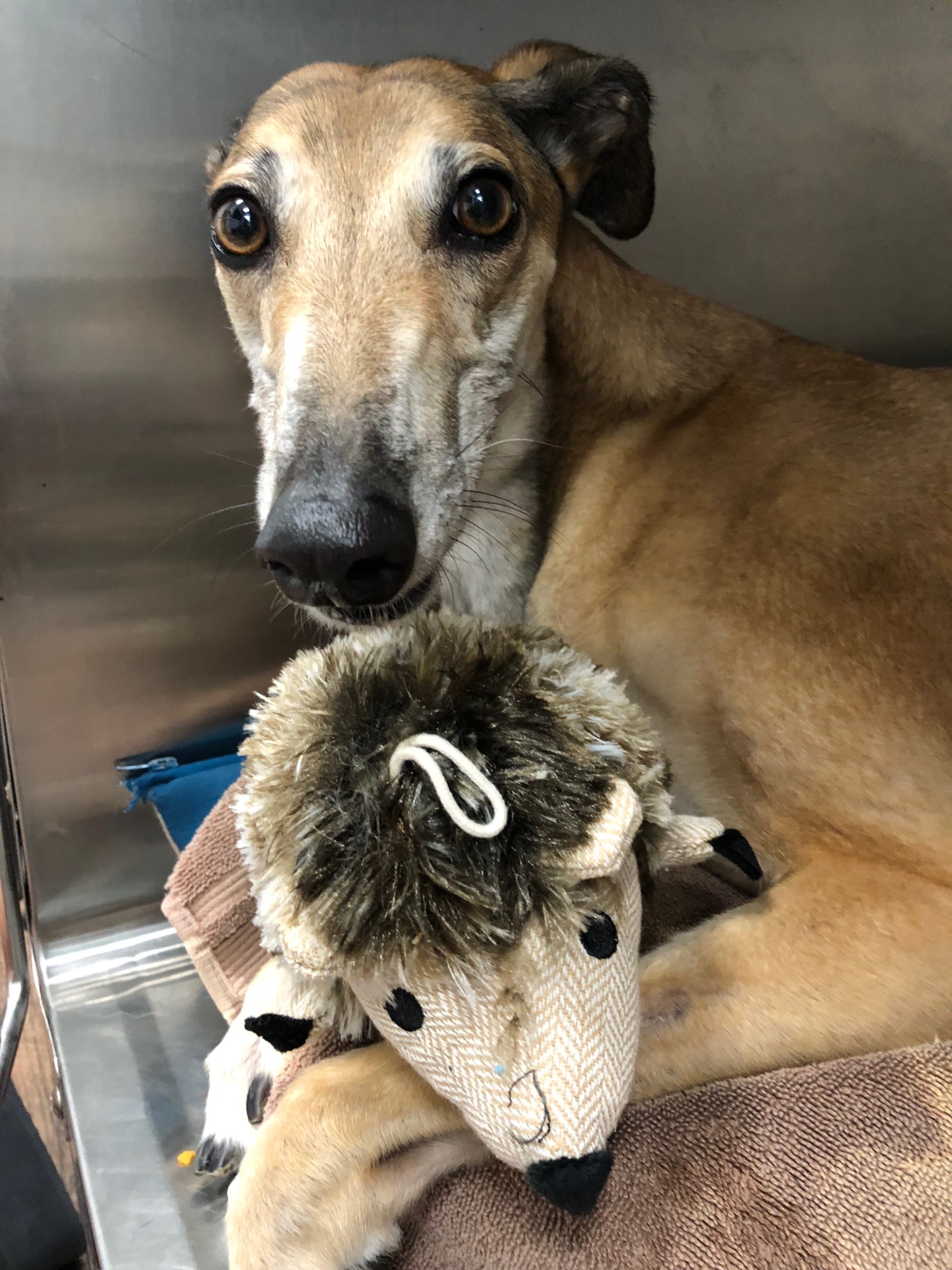 We’re glad life is getting back to normal again. Please, don’t beat yourself up. Things happen and the important thing right now is that she’s healed, healthy and happy once more. Our animals are so wise, we have many lessons like this to learn from them. Good job on being Kylie’s #1 student!

You two jave had quite an ordeal, but you voth jave handled  it like Champs!   Yes, she is a GREYT teaxher and she has  a very wise, quick  learning student! 😎

Ypu absolutely  are not alone!  You have definitely  stepped out of the shadows into the warm loving light of a community  who understands your bond with Kylie like no  others can. ❤

Looking  forward to following  more adventures  with this pretty gal.