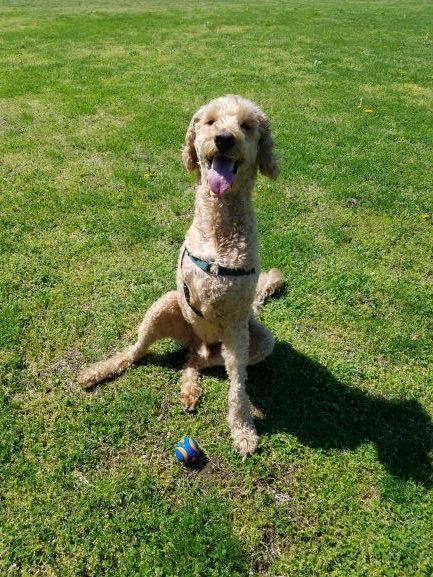 Today we celebrate two milestones!  First, today is Griffin’s one month ampuversary.  Looking back to my first post on April 2, 2020, I am amazed at how far Griffin has come in such a short period of time!  I remember Dr. Spector telling me that Griffin would be getting around well at 2 weeks and back to normal activities at 4 weeks, so I tried to temper my expectations when he came home.  I guess nobody told Griffin that he needed to take his time with recovery, that he shouldn’t be able to play fetch 10 days after surgery or give high-5s on his hind legs at all.  Griffin truly exemplifies the idea of living in the now, and I’m thrilled to be along for the ride!

Our second milestone is that Griffin walked 2 miles today and made it back to the point at Dyckman Fields completely under his own power!  When we arrived, Griffin stood looking at the view for about 10 minutes.  I’m sure part of that was needing to rest after walking a mile, but I also think that he was reveling in his accomplishment.  Our stroll this morning/afternoon took close to two hours with several stops to rest (and a very short pupnap – see video below!), but the weather was glorious, the view divine, and the company phenomenal, so neither of us was in a rush to make it back home.

Enjoy the photos and videos below! 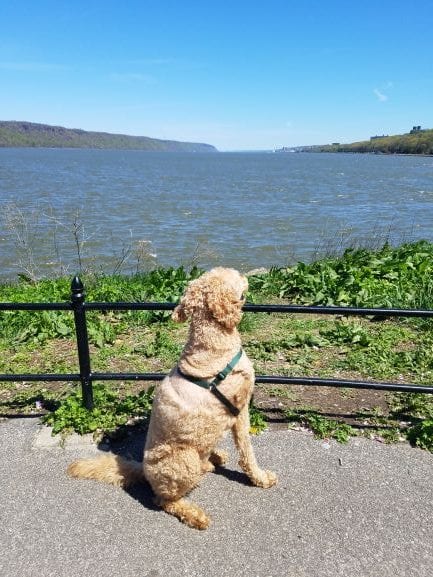 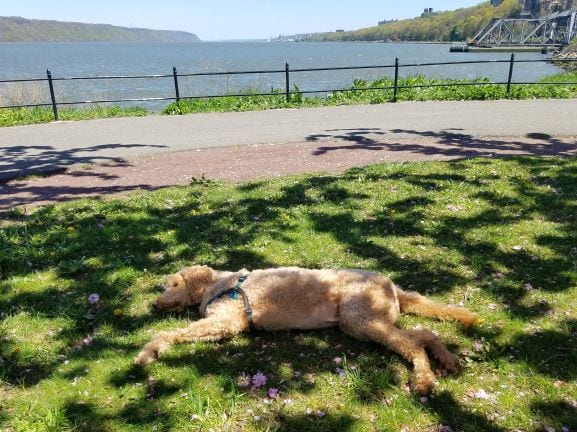 Griffin admiring the view of the Hudson River.

Griffin and I enjoyed this view while resting on the walk back home.

This is amazing!! You guys have been such an inspiration for me and Arktik. And I’m sure for many others. Griffin you have done such a terrific job learning how to do everything on three legs on such a short recovery time.

Hi Patricia!  I know you and Arktik are going to pay it forward, serving as inspiration to others along the way!  Did you see my response about the vaccine in the post I added before this update?  ~ Stacy

Watching Griffin taking in the beautiful scenery with ears blowing gentlymin the brezze….then taking in the “mediation  video” of the Hudson✌…then joining Griffin in for a pupnap💤….yep, found my Zen today with Griffin🙏

AND after a peaceful and serene trip with Griffin today, we get to top ot off with TWO MILESTONE CELEBRATIONS!!!!

HAPPY ONE  MONTH AMPUVERSARY  GRIFFIN!!!   ICE CREAM AND CAKE FOR EVERYONE!!!🍰🍦🍨🎂

Thanks for letting us share in all your victories,  all you adventures, all upir joy and all your Zen!!!😎   You, and your hooman, amaze is all everyday!!

We made it back to the end of Dyckman Fields this morning, a new resting spot for Griffin where he evidently finds his zen.  Griffin would like for you to please note the flower he is sporting in this photo! 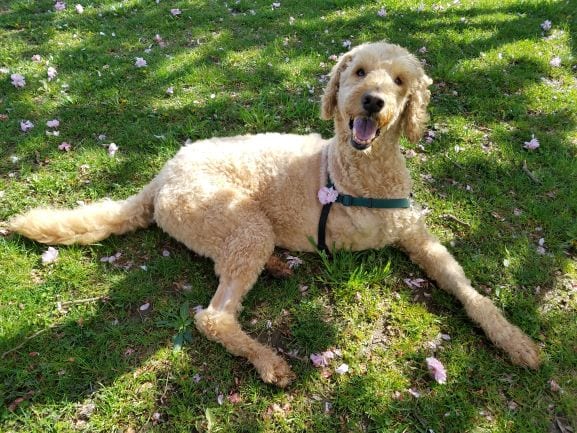 Today’s stroll was still leisurely, but we made the 2 mile round-trip in about 1.5 hours (30 minutes less than yesterday), with lots of rest stops along the way, usually caused by people wanting to say hello to him.  Griffin was always a people magnet before, but now people are curious about his life as a tripawd.  Some of the comments are silly (“He only has one leg!” and after being corrected, the person sheepishly replied, “I meant only 1 in the front.”), many are pitying (which I quickly shut down with “He still has one more leg than we do!”), and all are in awe of how well he is adapting and thriving.  Some dog parents are hesitant to allow their large or rambunctious pups to play with Griffin for fear of hurting him, but they quickly see that he can hold his own and still put rowdy puppies in their place!

Our longer walks definitely wear out Griffin and he spends the majority of the day napping.  The photos below are from yesterday and today. 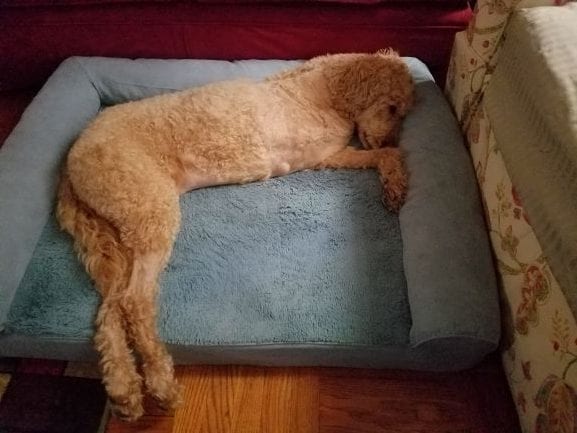 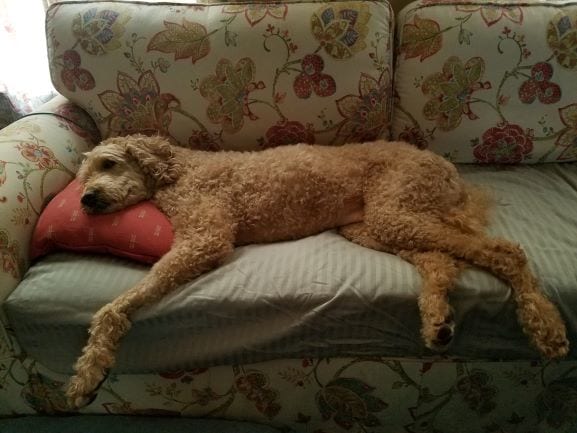 Enjoy your daily dose of Griffin zen!  Sally – I made the video especially for you! 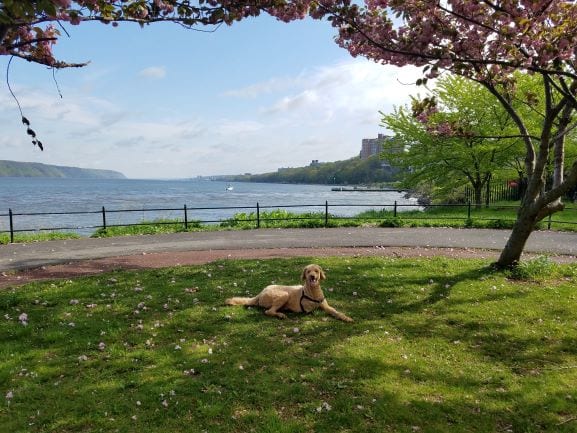 What a lovely way to celebrate your big milestone walk. You are such a strong, healthy boy, no wonder everyone wants to meet you! Wherever you go, you are the perfect Tripawds ambassador. Keep on showing the world that you and your “one leg” are pawesome!

Thank you so much for the information. I will definitely contact them, if we could get in the trial it would be amazing. I think we can get there in 6-7hr drive.

Griffin and Arktik are most definitely Tripawds twins! I’m so happy (I mean considering the big picture) to share this experience with you guys.

It really looks like Griffin had another amazing adventure today. We also had super nice weather this weekend and Arktik enjoyed it a lot (he is ‘good’ tired tonight).

I forgot to mention, I love your answers to comments. I have to get better at this, I’m taking notes haha. Everytime somebody gives us a pity look or say how sad this is, I find myself not defending my decision but almost (some people completely gets it, others you can tell don’t understand your decision). But in the end what matters is how happy our pups are 🙂

Hi Patricia.  When people start with a pitying comment, I gently cut them off and explain how he was in pain before and is not now, how he doesn’t have regrets like a human would with losing a limb, and while I believe he knows he lost a leg, he doesn’t dwell on it and instead looks forward to new adventures.  I then ask, “Does he look sad to you?” to which they inevitably reply that he does not.  With folks who are just casually insensitive – such as when people comment, “I wish I could get a ride like that and have his life!” when they see Griffin in the wagon – I’m less gentle, usually replying, “Yeah, he is recovering from amputation surgery – are you sure you want his life?”.

If you do make it down for the trial vaccine, we MUST get together to meet in person!  Hugs to you and Arktik!  ~ Stacy

Definitely!! That would be amazing

We would have a Tripawds adventure with Griffin and Arktik!

I will keep you updated on this. For now, as you know it is the same path as Griffin with Chemo for some time. So I am assuming it would be after all the chemo is done if we do get in the trial. Anyway, I will start by contacting them and see:)

Oh Groffon, you have got to be the most Sage chill doggy on the Planet!  Honest to goodness, your hooman has to compile these Zen Griffin videos!  Watching Griffin “being one with Nature, hearing the birds, seeing the lovely  Hudson….it all really is breathtaking  and meditative 😊  Really!  It is!  I soooo enjoy these videos.

And your responses to the comme ts were all spot on.  We actually have a thread on here somewhere about the responses  our members have made to insensitive  comments.  Your responses need to go in there too!

I’m guessing taking this walks with Griffin have been good helping you find your Zen, maybe?

And yes, he wears his flower perfectly!!!😎

Hi Sally!  The spot in the video is a patch of grass in the middle of a turnabout at the end of the paved path.  Previously when we were on our daily walks, I’d dutifully walk around the circle (got to get in my steps!) while Griffin stood at the start of the turnabout with a look that said, “You can be silly and walk around in a circle – I’ll just wait for you right here!”.  But now, he walks to that grassy spot, stands looking at the water for a bit, and then lays down for a much needed rest.  I didn’t think I’d be taking any videos today because yesterday was the big milestone day, but watching him sitting there made me feel peaceful and then I thought about you and decided we’d make a video today too!  The one I shared is actually take #2 because the wind was blowing hard in the first one, blocking out the sounds of the birds.  And it was perfect timing too – I was watching the recording, ready to end it at 20 seconds – right when Griffin decided he was finished resting and started to get up!  Griffin felt he looked very dapper with his flower and thanks you for noticing! ~ Stacy

And the thought you put into the video shows…and it IS appreciated!  And I did notice the soothing sound ofnthe wind…glad you waited for it to slow down.

Hi Stacy, Griffin is doing amazing!!  I always look forward to reading your posts, they’re so full of fun and positivity.  I know that you and Griffin will be in that children’s ward soon bringing happiness and hope to the kids