Near this Spot
are deposited the Remains of one
who possessed Beauty without Vanity,
Strength without Insolence,
Courage without Ferosity,
and all the virtues of Man without his Vices.

This praise, which would be unmeaning Flattery
if inscribed over human Ashes,
is but a just tribute to the Memory of
BOATSWAIN, a DOG,
who was born in Newfoundland May 1803
and died at Newstead Nov. 18, 1808.

So to anyone who has had the distressing news that their dog has osteosarcoma, please, i beg and implore you to amputate, there is so much support from people on this site, i know i couldnt have survived or made the right decision without the reassuring stories i read on here. Your dogs time is not up. Not by  a long shot. Once the pain of the cancer is gone you will be richly rewarded. Far more than you can ever imagine. At least give them that chance, you owe it to them. Yes the end is hard but i rest easy knowing i made the right choice by my ever beloved Bart.

R.I.P. Bart, i love you to the moon and back and miss you everyday. Until we meet again my boy, to be reunited forever xoxoxox….

Oh my gosh, thank you so very much for sharing Bart’s story. My Momma is sitting here bawling her eyes out after reading your post. It’s so touching and unbelievable to know that you were comforted so much by everyone’s story here, yet never posted until today. Thank you for having the courage to give him a chance at more quality time with you, I’m thrilled that you were able to spend his last months together, pain-free and loving life.

Yes, once you are touched like this by a beloved friend, life is never the same again. It’s always better and more meaningful, your hero’s lessons will never leave you, nor will his spirit. And now, it will never leave ours.

Wow, Thank you for sharing Bart’s story.  I too bawled my eyes out. Rip Bart, run free and enjoy yourself.

Oh my gosh…what a beautiful tribute.  I’ve been bawling along with everybody else who has read this.  Thank you for your sharing your story.

So many tears.  So many.  I feel you said it beautifully: “I miss him like sleep. But the painful memories of losing him are rapidly being replaced with the knowledge that my life is all the better for having known him and memories of the goodtimes.”  After so many years, our dogs are family and it’s so easy to take them for granted.  They are always there, always here, that in the first moments they are not…it’s a gap that doesn’t close.  And it doesn’t close for a long time.  I’m glad to read that there is a replacement of emotions happening for you.  I wish you lots of HUGS.  Thank you for sharing this beautiful, loving story.  What a pal.  What a dog.  The world is a better place because you two had each other.  Rest in peace, Bart, but also run free and fast!  It was a pleasure to read your story.  (sniff, sniff, tears…)

Thank you for posting these details. Do you have a photo of Bart you would like us to share with his story on 03/03?

wow, thank you so much for sharing. bart sounds like a really special guy

It’s probably too late to use Bart for the big 3/3/2013 post. I cannot figure out how to post photos of Bart. I would really like to share them. Any help would be appreciated. Otherwise feel free to send me a message on facebook. Just mention you found me on Tripawds and I’ll add you

His story should be shared. rick mathew mcarthur. Just look for the tripawd dog as my profile pic

Actually it is all capital letters on each name

Hi Rick.  Most of us take advantage of the blog section to upload media (pictures or videos) to a location on the intraweb.  Then you can insert the URL from the photos into your posts, or just insert them into the blog and post the blogs.  Some of us also use other photo hosting sites, like photobucket.  To insert the images into the forum posts, you click on the little tree in the toolbar just above the post window.  (I only just figured this out myself because my work computer doesn’t allow me to see the toolbar).  Would love to see pictures of your Bartholemew.  Your initial post was so touching and you clearly portrayed the bond that the two of you shared.

Oh boy.  I am also bawling my eyes out. That was so beautiful. Thank you for sharing Bart’s story.

Here’s a great pic of Bartholomew! 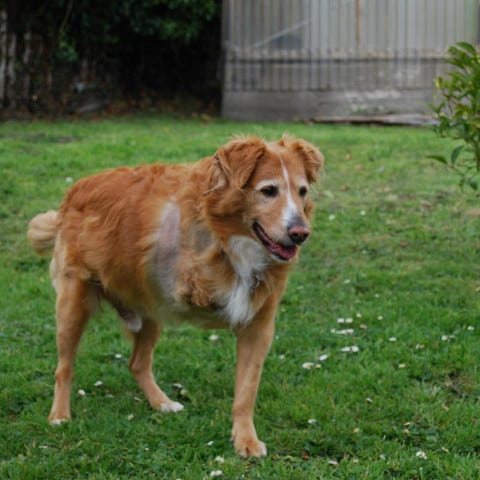 has a very similar story she had her amputation just over a month ago her left leg we found out she had osa in her leg and we got the biggest shock thinking it was arthritis any longer and the bone in that leg wouldve snapped early decection is important so is amputation.

What a beautiful story!! Your Bart is one handsome boy. Thank you so much for sharing this with us.