I know some of you use boots for your dogs for traction in the house...I'd be interested to hear which ones you purchased! As the house dries out from the furnace running all the time he seems to be slipping more

Yes! I use Tammy and Teddy's.

They stay on Cadence and don't slip down or fall off. They were handmade especially for her measurements. They have velcro to keep them on and a rubbery bottom that provides strong traction . I really like the customer service the lady provided and when she found out Cadence was a tripawd she asked why we were ordering 4 (well because they didn't come in three's. lol) and only let us pay for three boots instead of making us purchase 4 boots. I wouldn't have minded though because we would have had "three boots and a spare". MUHAHAHAHA!

Cadence here: OMDAWG! Mom thinks she is so funny and witty. Pawrents! They can be so embarrasing sometimes. Here I am showing off my Tammy & Teddy's on my birthday: 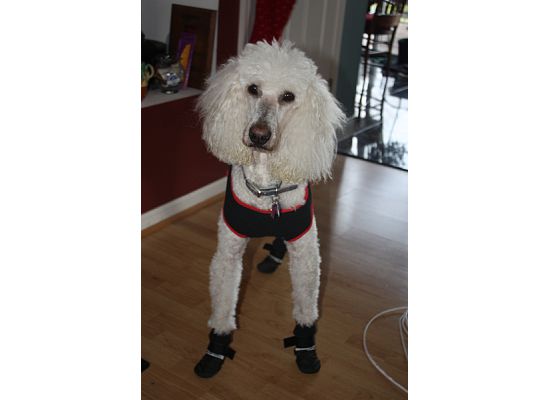 Yes! I use Tammy and Teddy's.

Please be sure to use the code "TRIPAWDS" when ordering Tammy & Teddy's custom dog boots, and don't miss our review!

Here is our list of the best recommended traction for tripawds.

We had throw rugs everywhere!  And I mean everywhere that there was tile in my house!  I put them down after Comet blew her first knee. (she still blew her second knee)

Since I had Comet for 6 more years after that, I just bought matching ones and made them apart of my decor.  After I finally broke down and pulled them all up when she died, I realized I hated not having them!  Rocket may have 4 legs but he dances and prances and so......I have bought more and put a few down!  (not as many as before but enough to ease my mind)

I bought mine at Walmart.  They are around $12 for 36 x 40in.  They have several choices in many sizes and they all match.

all correct - and I will add that my temporary inexpensive solution to everything slippery is yoga mats.  Easy to get, and cheap (don't buy the fancy ones, a $10 one will do).  Ajax knew immediately to "follow the yoga mat road".

Interesting about the yoga mats.   I've notice Jack slipping too.  I've never imagined that he would keep boots on his paws.  Did you all find that your tripawds were more accepting of this gear than they would have been with their spare?   The main level in our home has wood floors, but the stairs, basement, and upstairs are all carpeted.  I surely want to get Jack everything he needs to be safe and secure, but I don't want to spend $$ unnecessarily.  What is the concensus?

Yeah, has any one bought the boots and their dog wouldn't keep them on?

I'm pretty sure Comet wouldn't have worn a boot.  Having only one good front leg, I think she would have hurt herself since she wasn't used to walking with one.  When she had a bandage on her front good foot once from a pressure sore, she wouldn't walk and tried to jump her good leg out of out.

For me, it was just so much easier to have peace of mind with rugs. It was my one big regret not doing it her first 6 years of life.  But I never thought about.  She took face plants many times falling and sliding across the tile and I'm almost possible that she cracked 3 teeth over the years because of it.  It seems every time I took her for a dental, there was a cracked tooth that we had to pulled.

I know that ROSS discount stores have a ton of big area rugs for really cheap.  I would have gotten one there but they were too big. (I was just looking last week at them) I think the most expensive one they had was $49 for like a 9x7.  Average was 7x8 for around $30. Be sure to check it out if you need a big area to cover. (and if you have a ROSS store nearby)

Sorry Monkeybutt!  I didn't notice I was using your account!