Does anyone have experience with elbow dysplasia in dogs? Especially tripawds?

A little background on 11 year old Izzi: She has had  major health problems her whole life beginning with luxating patella surgery at age 1and two blown cruciate ligaments a few years later. Then she was diagnosed with osteosarcoma in Sept 2016 and had her right back leg amputated. In December 2017 she had a softball sized tumor on her spleen so then she had a splenectomy. As most of you can probably figure, she's far exceeded the life expectancy she was given 2 years ago. She has been my little miracle dog.

Earlier this week she presented us with another scare. She was getting around slowly and wasn't acting like herself. She rapidly declined over a 24 hour period, similarly to how she was acting when we discovered the spleen tumor. We rushed her to the vet, fearing the worst. The main concern was that she could not put any weight on her right front leg but we opted for full body X-rays to make sure we didn't miss anything else. The good news, there's no evidence of any new tumors and blood work was beautiful. The bad news is pretty severe osteoarthritis throughout her body. The biggest areas of concern are her elbows and shoulders. The radiologist also gave a diagnosis of FCP (fragmented coronoid process) aka elbow dysplasia. She spent one night in the hospital on IV pain meds and came home with Rimadyl twice daily. I've also started her on Dasuquin and have considered CBD oil. She's moving around a lot better and mostly back to her normal bright self but I fear she's in quite a bit of pain. More than she lets on, anyway. We're going to continue swimming to keep her mobile with low impact but I'm curious if there's anything else we could/should be doing. I don't want her to be uncomfortable or suffer in any way. As a tripawd, having a sore elbow is a really big deal since the majority of her weight is on the front legs and she can't balance without both fully functioning. It sounds like this condition is not reversible and all we can do is manage the symptoms. This is the first time we've been faced with a serious problem that we can't really "fix" and it's been really hard for me to accept and process.

Just curious what has worked best and what hasn't for anyone else who's been through this.

Izzi is a MIRACLE DOG indeed!!!!   Other than this hiccup, it sounds like she is enjoying  being Izzi, and that's all that matters!!!

I can only share some info I've  gained as a result of "issues" with Frankie , my front leg tripawd.  He's  a rescue Coonhound so I don't  know reason for amputation, but he's been a tripawd approximately four to five, maybe even six, years.   Lots of wear and tear on those three legs.

In the past year he has had cruciate repair surgery  on one of remaining  back legs.  Then about five months later, possible meniscus damage to same leg.  Off amd on during some of this, he's  basically  been using two legs.

All of this has caused a lot of strain on  that front leg.  He has "elbow issues", as well as bad arthritis.

Making him  slow down has been hard.  I make him stay inside far more than he would like, but it has helped!

The Rehab Vet, as well as info on this site, has been INVALUABLE .

Has laser therapy  been suggested?  Although  I haven't  been able to swing it yet, the suggestion for his front leg and that back leg is to have two to tjree treatments per week for a month, then taper down after that.

UCII AND Wellactin.  Maybe someone  can do a "search" for the recent post on UC11

Wellactin is fish oil, Synovi is glucosamine, as is Dasuquin (I think anyway...so check with Vet)   Same thing, both work in different ways

Gilliprant for anti inflammatory (guess it's  similar to Rimadyl).  Having used voth, I think the Gilliprant "may" work better for him.

My philosophy  is "something is better than nothing ".  So if not able to do all of the above, just pick maybe two or so and go with that.  And do lots of massage up and down spine and arpund shoulder and neck.

Just throwing  this out in the "for whatever it's  worth" column and hoping something can help.

Your girl is absolutely  amazing  and I have no doubt she is still enjoying  her miraculous  self!  Oh, and great rhat her other tests were good!!

Oh poor Frankie!! He sounds like he's a lot more of a wild child than Izzi. I'm somewhat thankful I don't have the battle of trying to slow her down. She's mostly a couch potato so we don't have to worry about her overdoing it as much. She does insist on jumping on and off the furniture though.  I try to restrict that but it isn't easy.. I also have a ramp for her outside so she can avoid the stairs, yet she insists on taking the stairs every time. It's her way or the highway, haha.

Laser therapy was not mentioned this time.  We have done that in the past for post -op recovery though. I didn't even think about it but I can ask her vet.

She is taking Dasuquin now but I will check out those other supplements as well.

The vet mentioned Gilliprant and said it does work better for some dogs and is generally considered safer for long term use, especially in cases where liver or kidney function are concerns. But it is quite a bit more expensive than generic rimadyl and Izzi is in good health overall so we opted out of that for now.

Adequan is another one we've done before, back when she had the knee problems. We were trying other alternatives prior  to surgery but ultimately had to repair both knees. I think it helped her pain quite a bit back then so I'll keep that in mind if the rimadyl is not cutting it.

The costs of all her surgeries have been piling up on my credit card and now we have the added expense of daily medications, plus I pay $45 every time she goes to swimming therapy. So there's only so much more I can do but I'm going to try my best to make sure she gets what she needs.

I'll definitely be trying the neck and back massage at home. Her swimming instructor incorporates some massage into each session as well so hopefully she's getting some benefit from that. Thank you so much for all the info. You're always so kind and helpful!

Izzy is a fighter!

My miracle dog was quad Pug Tani. Because of a brain injury the vets thought she would only live to be 7 or 8, she made it to almost 15! She had cancer, epilepsy, IBD... but applicable to this discussion she had severe arthritis in her back and all 4 legs.  She was diagnosed at 6 years old and we started her on fish oil and a dasaquin type supplement.  Every so often as her symptoms got worse we would up the amounts of what she was taking or add something new.  By the time she was 12 or 13 we had added rimadyl and gabapentin.  She was pretty much maxed out on everything and I thought I would have to make a life quality decision very soon.  That's when my vet suggested adequan injections.  We did a loading phase where she got shots every week or two weeks, I can't remember, then we went to a monthly injection.  It was like magic!  Tani lasted until almost 15 as I said and I lost her to a stroke not arthritis.

Adequan is expensive- which I'm sure you know having used it before.  Izzy did well on it?  It doesn't work for all dogs.  And the last 8 months or a year we went to injections every two weeks.  Tani was only about 16 pounds so her dose was relatively small, and I learned to do the injections myself to avoid the frequent vet visits.

I also broke out Tri-Pug Maggie's old stroller and limited Tani's walking distances, especially on hard surfaces. She didn't like the stroller at first, but she got used to it.  I also did chiropractic with her.  I had a hard time believing that it would help her arthritis but it really made a difference.  We never tried acupuncture, Tani didn't like to be touched or be still, she barely made it though her adjustments. And  I had the same problem with her jumping off of furniture- it took years for me to get her to use the stairs I had next to the bed and couch, but she finally stopped jumping off.  Then she couldn't do the little stairs and she would wait for me to get her down.

And a quick humorous story for a smile!

Because of Tani's brain injury she was a slow learner but once she learned something she never forgot it, she had finally learned to wait for me to get her off the bed. When Obie had his knee surgery I put my mattress on the floor so he could sleep with me and I didn't have to worry about him jumping up or down.  Although it was only 8" or so off the ground Tani still waited for me to help her off the bed! 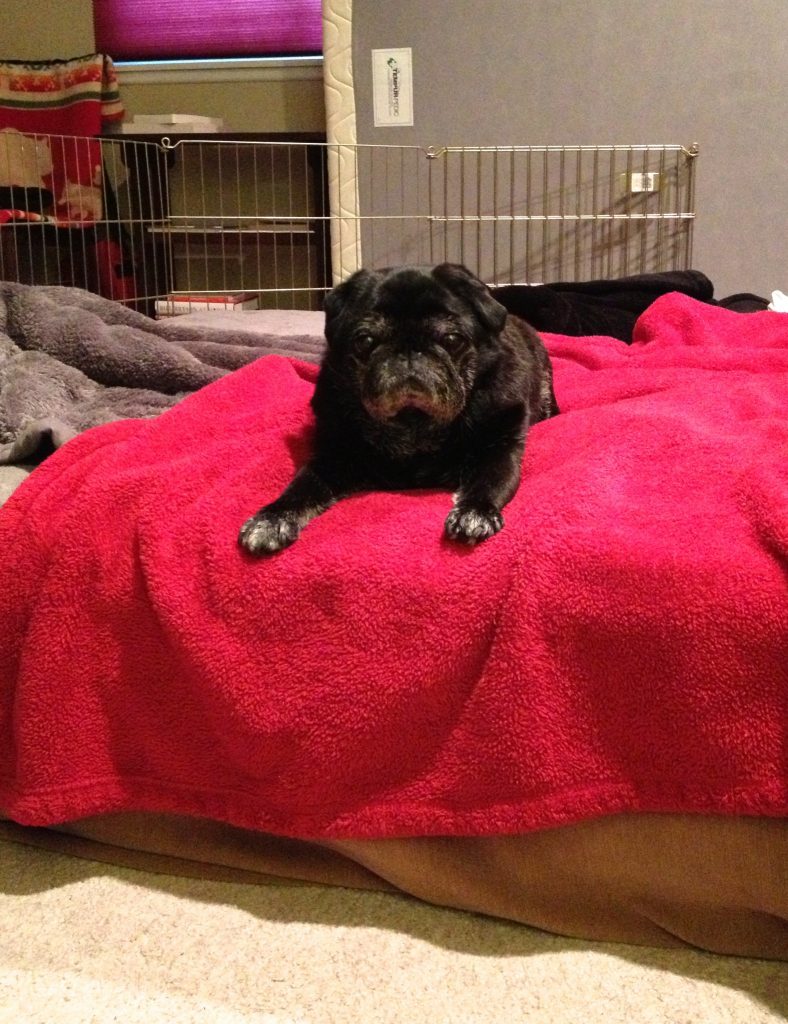 Arthritis is tough to deal with, hang in there.

Izzy is so amazing! I'm glad to hear she's overall doing pretty well considering, but I know how hard it is to be told you don't have a 'fixable' diagnosis. We are dealing with this with Wyatt Ray currently. He was just diagnosed with osteoarthritis in his tarsus, and was given a steroid injection in the joint. It's made a tremendous difference! The effects are supposed to last anywhere from three to six months, so he shouldn't need it more than once or twice a year at most. I need to blog about it. Did your vets recommend a steroid shot?

Here is one of the Tripawds Nutrition blog posts Sally was referring to. You'll find other helpful links in the article.