Today I cooked for Griffin!  During my consultation with Dr. Wolf (petsynergy.com) last week, we discussed overall nutrition.  Griffin has eaten Taste of the Wild dry dog food since he was about a year old, varying between the High Prairie and Pacific Stream formulas.  I chose this brand mostly because it was high quality (meat/fish as the first ingredient) and grain-free , and thankfully, it is listed on the K9 Medicinals website as one of the better brands of commercial dog food for pups with cancer.  Griffin’s appetite does not appear changed since surgery and two rounds of chemo, but with time on my hands during the COVID-19 pandemic, and wanting to give him the best chance to fight his disease, I decided to try my hand at making a batch of food that could be used to replace a portion of Griffin’s kibble each day.  I researched a lot of recipes for dogs with cancer, designed to appeal to their appetites to maintain good body weight and filled with cancer fighting ingredients.  I wanted something that would be relatively easy to make (so I would continue the habit) and chose ingredients that I knew Griffin would eat (eggs, for example, are a no go for him).  Some of the ingredients were based on what I had in the house already and so I expect I’ll modify this in the future (for example, adding more apples, using broccoli instead of kale, or adding fresh/frozen blueberries instead of dried).

I used a squirt of salmon oil to sauté the minced garlic and meat on very low heat (I did not want to brown/burn the meat and introduce carcinogens).  I chopped the kale, bell peppers, and apples in a food processor and added them to the meat once it was cooked through.  I simmered those ingredients together for 30 minutes and then divided them into 9 portions of about 8 oz each (I used a food scale, not a measuring cup), freezing some and refrigerating the others.  Before serving one portion, I warmed the food to room temperature, and stirred in 4 ounces of cottage cheese, 1/3 can of sardines, and a handful of dried blueberries.

The photos below show the meat/veggie mixture after cooking and the meal right before serving. 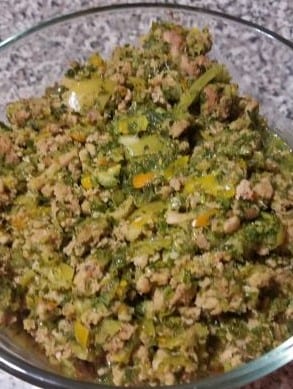 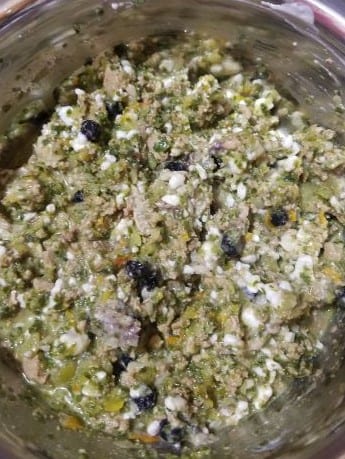 This photo and the video show how much Griffin enjoyed his meal, so I’d say this recipe was a success! 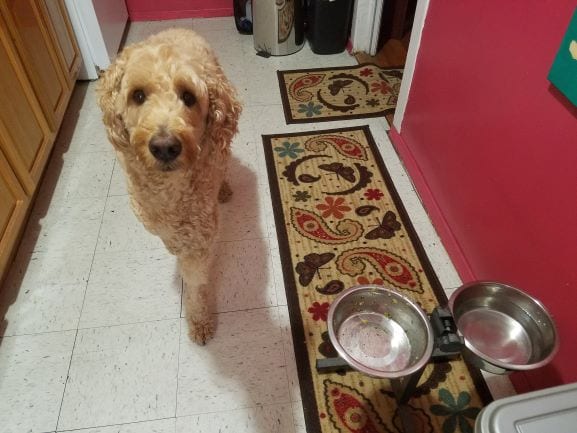 You are ALWAYS so gracious in sharing information  with everyone.  It IS appreciated!!

Griffin has impeccable manners and is always such a gentleman.   He knows how to savor  every bite👍

Hi.  I’ve pared down Griffin’s recipe a bit based on trial and error, and to allow for large batches to be made and frozen, so here is the updated recipe:

I cook the meat on a super low setting and once it is cooked through, drain off all the liquid.  I then add the veggies which have been finely chopped in the food processor.  I let the veggies heat through to express the water from them being frozen and by that time, Griffin is usually under my feet in the kitchen waiting to be fed for that day.

I eliminated the other items from the recipe mostly to keep it streamlined.  Griffin still gets apples and cottage cheese as treats, and since he has fish oil (Nordic Naturals) added to his meals along with his other supplements, I eliminated the sardines.  I measure out 1 cup portions for Griffin and I’m able to get 9 from this recipe (the meat really shrinks once it is cooked and drained!).  I add all of his supplements to each container after the food has cooled before storing most in the freezer and a few in the fridge.  The photo below shows a doubled recipe

Thank you Stacy, this is pawesome! What a lucky boy to have a personal chef that makes such great meals. Thanks for sharing!