So I have been thinking more about how I can keep Molly on track with her weight reduction yet still give her treats when we are out and about and training. I love the green beans idea, but I don’t want to travel with soggy green beans in my pocket

So I was thinking of using my hubby’s handy dehydrator on some fresh carrots. Has anyone tried this? Are there any other veggies I can try out?

Any insight would be greatly appreciated!

Do you mind carrying cut up baby carrots? I don’t think you would have to dehydrate them and they are easy to carry. I carry those for myself! 🙂

Shelby only liked her baby carrots if they were pre-cut for her but if Molly likes carrots, that might a good one. Or cucumbers. Shelby loved cucumbers too!

Alison & her Shelby fur-ever in her heart

You absolutely can do that! I know you can buy them as well, but home made is so much better. If you decide to do it, let us know, we’d love to share it in the Tripawds Nutrition blog . Great idea!

I might try both at first to see which kind Molly prefers. She is totally not a picky eater, as evident by her current size ;).

And Jerry, I plan on making a Youtube video of my attempts at making her dehydrated treats, so I will post a link when it is up and running!

Oh fantastic, I can’t wait for the movie!

I’d love to see how this goes too! I’ve been on the fence about buying a dehydrator now for a few months. I dried some banana chips in the oven and everyone (including Tanner) went gaga for them.

Here’s another great use of a dehydrator: Homemade chicken jerky treats! 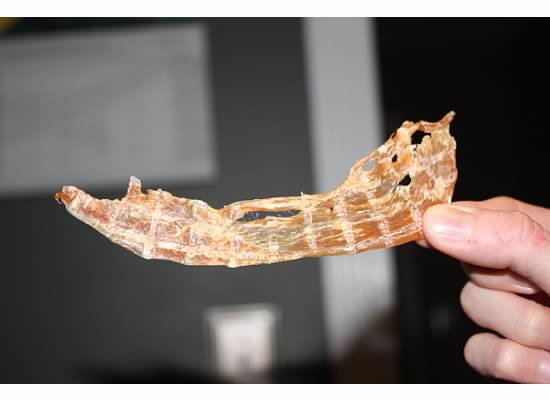 Here ya go! Molly loves them!

This video is ADORABLE!  Where’s the Emmy Award? You get the award for best DOGUMENTARY in the Health and Nutrition category!

Thanks a bunch, this is so wonderful, and thank you for the shout out too, that is so kind.

Oh I have to go buy a dehydrator now!!