After 14 months and 19 days, Captain Jack Dillon fell asleep in my arms one last time.  He was having trouble walking and had taken to "face-planting" the past couple days...Jack just wasn't Jack anymore.  He still enjoyed life, he still perked up when people were around, so we didn't feel it was time yet.  Today, particularly this evening, was different.  He wouldn't eat his supper.  I took him outside to potty before bed and he did both and while we were waiting for Gracie to finish, he did a face plant then just sat down in some plants and looked at me like "ok mom, i'm bored, i'm done".  And I just knew.  So after crying for a bit outside, my dad and I went to tell my mom, he called the specialty center, and we headed on over.  It was all quite easier than I expected...they just took us into a room, Jack laid down, and they put the catheter in his back leg just like I had asked (so I could hold his front paw).  They had a really nice bed for him, but he preferred the cold floor, so I took over the dog bed which was, as promised, quite comfortable

Every time someone came into the room he would wag his tail, but he never once tried to get up, another sign that he was on board with the events of the evening.  The doctor came in, he snuggled in next to me, and put his head on my shoulder (a move that he used to love but hasn't done in about a month).  I closed my eyes and stroked his arm, told him how much I loved him, smothered him in kisses, and he just literally fell asleep.  I thought I wasn't going to be able to see his non-living body, but once his spirit left, all I wanted to do was snuggle him, squish him, be near him, kiss him...so that's what I did for a couple minutes.  Then it was like, I just wanted to leave.  My sister was on speaker phone throughout the ordeal so she got to be a part of the evening as well, and when we got into the car to go, she said she was watching comedy central which for some reason I thought was completely hilarious and so ill-fitting that I started laughing and my sister, my dad, and I made jokes the whole way home.  I'm OK.  I will miss him, but the truth is, Jack has been gone for a while.  I did cry again when we got home and I thought about seeing his harness in the entry way in the morning, so I had my dad hide his leash and harness until I'm ready.  I called my boss and am taking the day off from work tomorrow - I feel like I would be fine, but I work in a store where we get a lot of dogs in, and I think I may have a bit of trouble with that so soon (my boss understood).  I chose a private cremation and will send some ashes to my sister in OH and to Aaron (my ex, Jack's dad) in MI.  I can't believe that in just like, 30 minutes, this whole journey can be over, but also, as weird as it may seem, I am excited to start healing completely, to see where my life is going, and to see how I can help others because of my experience.  In other words...Jack's "gone", but we ain't goin' anywhere 🙂 We are not sorry here, so there is no reason for anyone else to be...also, I think his invisible self is a tripawd as well...he really seemed to come alive once that extra limb was gone 🙂  Please no rainbow bridges...Jack preferred docks and blankets; Maybe to eternally lounging on a blanket on a dock by the water...sounds really, really nice 🙂

I won't say the words I would like to say tonight out of respect for your wishes.

Instead I will think of Jackers and you with a smile and fondness.  I will remember being new here on the forums and seeing his video of him bouncing around like he floated on air and wondering who is this magical dog.  I will think of the happiness that he had and how he made me feel seeing him be so happy on 3 legs.

I will silently shed my tears for your loss and ours in him.  However, my heart will be heavy as I silently say my goodbye.

Please accept my vitual hug for all the love and laughter you have shared with us.

Oh, Laura, I can't even read your post now; I'll have to ready myself and read it later.  I just want you to know, you are in my thoughts and prayers.  The Captain will be greatly missed around here.

I won't say the words I would like to say tonight out of respect for your wishes.

Instead I will think of Jackers and you with a smile and fondness.  I will remember being new here on the forums and seeing his video of him bouncing around like he floated on air and wondering who is this magical dog.  I will think of the happiness that he had and how he made me feel seeing him be so happy on 3 legs.

I will silently shed my tears for your loss and ours in him.  However, my heart will be heavy as I silently say my goodbye.

Please accept my vitual hug for all the love and laughter you have shared with us.

I don't think I could say it better than Cometdog, so I will say - X2

Holding you in my thoughts and sending you strength as you heal.  RIP Captain, you will live on in our hearts.

We are not sorry here, so there is no reason for anyone else to be...also, I think his invisible self is a tripawd as well...he really seemed to come alive once that extra limb was gone 🙂  Please no rainbow bridges...Jack preferred docks and blankets; Maybe to eternally lounging on a blanket on a dock by the water...sounds really, really nice 🙂

Your wishes are granted

I didn't know Jack all that well but his video that Jim posted last week is what I'll remember!  Him bouncing up on concrete walls, retrieving his toy for Laura, to just the "look" in his eye of MAN! Look at me world!  I'm a happy-go-lucky Tripawd and damn proud of it!  You did 'good' Laura...what a Mom...

You sound admirably strong.  No doubt Jack had something to do with that.  Let life heal your heart and take you to wonderful places.  You'll always have a beautiful tripawd boy to accompany you.

we send blessings to you.  surely jack is on that dock, enjoying his moments still.  love never ends.

I can not help myself as I shed many tears but all the rest of your requested response is very easy. Jack IS an inspawration to any and all who follow this journey. Imagining the two of you sitting on a dock watching the tide will be a extremely easy and comforting task. They are here with us and I know that I feel Miss Cherry as I am sure you feel Jack with you. We both know that we are better for having them pass through our lives and the test of the last fourteen months with them only strengthened those bonds.

May you forever approach life with the zeal that Jack showed. May you feel that you life is as full as Jack knew his life was. May you fully understand just how great a companion you are to Jack - for he still walks beside you.

Your story made me tear up a bit, but also made me re-realize that we need to appreciate every day we have with them because someday they will be going to the dock for their eternal rest (Chloe would probably go to squeaker toy land

). Sending my positive thoughts to you...

Virtual hugs to you Laura, and to Invisible Jack, looking over the water.  Such a nice picture.

I admire your strength and your ability to see the unseen.  Thank you for sharing your journey and for continuing to share.

Shedding some tears for your loss of the visible part of Jack (but also shifting focus to the future, as you request)...

Cemil and mom Mary, Mujde and Radzi….appreciating and enjoying Today

Laura, OK, we will respect your wishes and will stop crying our eyes out in front of our monitors. Jack has meant so much to us here and we don't ever want him to leave OK? Captain Jack will live forever here. We can't believe this day has come. 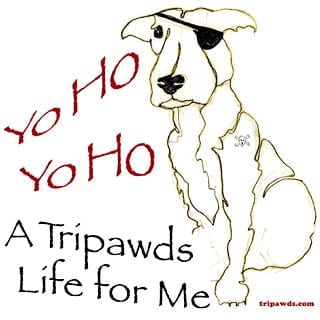 His spunk and your sense of humor have always gotten the Tripawds community through hard times. Now that it's Jack's loss that we are coping with, we will keep his lessons dear to our heart, smile and live the way he always everypawdy to: with all the gusto and bravery of the mightiest captain on earth!

In honor of the whole Comedy Central episode, this tacky tidbit of pop culture is dedicated to our friend, Captain Jack.

Sail on Jack, sail on.

Someday we shall meet again.

Oh Jack, you incredible invisible dog...sitting on a blanket on a dock by the water!  The Rainbow Bridge is whatever our pups want it to be.

Carry on Captain Jack.  You'll be missed, being invisible and all.

Laura, we are so sorry to hear of Jack's passing.  Our (Admiral) Max loved to go on pontoon boats in Newport Harbor, so we'll make sure he hooks up with Captain Jack for an eternal seafaring adventure!  Our thoughts are with you and your family.

Capt Jack - he will never be forgotten.  I remember he was one of the first tripawds we met on this site and I will always remember his energy and gusto and always thinking what an inspiration he is to us all.  What an honor it was to get to know him and you Laura.  Thanks for sharing your last (physical) time with Capt Jack - very moving.  Let the healing begin.  Here's to Capt Jack sitting at the dock resting peacefully and pain free. (I have to admit, this does bring tears to my eyes.)  Wishing you a lot of peace and comfort too.

My sweet golden Mackenzie.  She became my angel on Dec 29, 2010 at the age of 8 1/2  although she was always my angel from the time we brought her home.  She was diagnosed with osteosarcoma in Sept 2009 and officially became a tripawd (front leg) on Nov 5, 2009.  She will be forever in my heart and now she's running free with all of our other tripawd heroes.  I love you Mackenzie!