Hi, pool season is starting and Novak first swim as well. Last year, he did go swim in the lake 1 month post op, but didn’t go in my above ground pool. So, my challenge are, he can’t seem to be confident about jumping in anymore, I have to grab his life jacket handle to “throw” him in(he love it and has total confidence in me). He wants to go, but it is slippery to jump in. He can’t climb the stairs, I have to help him, but he is so heavy to lift in that position. I wanted to add unslip stickers on the stairs to help. My 2 life jacket sucks! One the handle broke… and the other one, doesnt lift him him up in a ergo position like the harness. Is the ruffwear life jacket is better? Is the handle solid? Any advice on how to make my pool better to get in and out for him? He really love to swim and get his frisbee, but little guy, its ruffer than a beach!

Can’t wait for the videos!!

Others will give you advice on the harness as Happy Hannah never went swimming, so I have no input.

As far as the stairs, wonder if cutting up a couple of asphalt shingles would work? Maybe even cut up pieces of yoga mat?

Is the ruffwear life jacket is better? Is the handle solid? Any advice on how to make my pool better to get in and out for him?

Well, you know we are going to be biased about this question because we LOVE Ruffwear’s Float Coat . But the reason we do is because it really, absolutely, paws down is the best dog flotation jacket available. We’ve tried others and they don’t cut it. That’s why Ruffwear’s Float Coat is the only jacket we carry in the Tripawds Gear store. Here’s why: 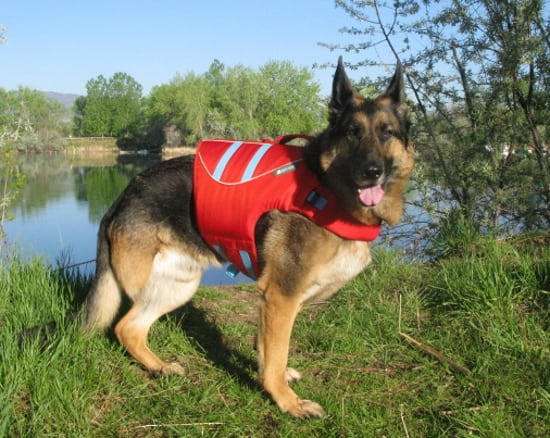 When it comes to jumping into the pool, I’m just guessing based on what I know about rear leg amputees, but…perhaps Novak is not confident because he doesn’t have the propulsion he used to have when he had both back legs. All of dogs’ propulsion to jump and move forward happens in the rear legs. With one less leg they are weaker in the rear.

If he used to jump in, he has it within him to to it again. But it will take lots of patience and tons of yummy treats to bribe him to leap in. Is there a way for you to work with another person in the pool? You can stand in the water and bribe him to come in with treats, while another person gently lifts and helps him in? This would also be a great task to work on with his rehab therapist. Is there a way for you to do that?

Most dogs won’t jump into a pool even if they have all four legs. Our Wyatt won’t, and neither would our Jerry. Animals have a problem judging depth and when standing above a drop-off like a pool, or ramp, they panic because they don’t know how far it is to the bottom. We won’t even try to get Wyatt into a pool, he’s much too freaked out. Jerry never would, even when he had four legs. But both of them have no problem swimming in lakes and ponds that have shorelines in which they can gradually walk into the water.

Thanks! Yes Novak always jumped in before…he did jump in once on 3, but was slippery, so now, he doesnt want to. I need to fix my setting so its safer for him to go in. The other dogs just go down the stairs and go in, but Novak is crazy LOL always moving like a rebel without a cause LOL Thanks for the review of the float coat , will definately buy that one to replace those I have.