Asking for pawsitive thoughts for EmmaRose:)

From one corker to the next: babe, that’s great news!! Also, to keep your hoomans on their toes like that, that Bear of yours and yourself do an awesome job! I mean, even I am impressed and I thought I was the one that excelled at these things!!

So, hate to admit it but: hats off to DaBear headquarters once again, in all and every respect and with all due respect as well of course.

(Dang, gotta go and think of something new now…)

all the best Bae 🙂

PS: tell the Wooby Wabbit that crown jewels are something else…

Just wanted to check in with Da Bear HQ, as I’m thinking we haven’t heard from you in a while. Do hope all is well and that dastardly Rabbit hasn’t gnawed through the comms cables again, holding you all to Dog only knows what wabbity wansom.

Seriously, I do hope all is well. Please update us when you can. We think of you often, and always with a smile.

Oh gosh Clare! Me too!! In mt thoughts really strongly recently! So glad you checked in on her!! When we don’t hear from DaBearsHQ for awhile, that’s scary!! Then again, maybe not!!

Oh my goodness, look what just arrived, whistling down the wire from Georgia, a kiss for Meg from Ruby Rotten Roo!!!! Not a great deal more intel at present, something about a rabbit hole, but watch this space, I am confident that, now contact has been established, more details will follow shortly… 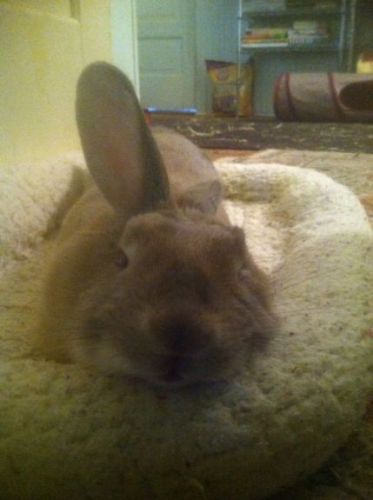 Little Bunny Roo Roo, hopping through the Da Bear HQ, chewing on the cables, and bopping them on the head…while it is very true that Ruby Rotten Roo MAY have been partially responsible for the news blackout from Da Bear HQ ( we now have lost our satellite TV thanks to a severed cable, ahem…), it is equally true we have been remiss ( and amiss) and missing ALL of you. Thank you for checking in on Da Bear HQ where adventures have been had both good and bad.

We will skip the No Good Rotten News and go straight to the This Is Good News News:

A)We at Da Bear HQ have no PhotoFubarUcket account. Our Wind Up iPhone 4 and Wind Up iPad are not compatible so we cannot be blackmailed:) However, we will gladly participate in the cursing of the company…geesh!
B)We have heard that THE PAWRTY of THE CENTURY was exactly that and that our beloved and charming Clare managed to make international news AND report on such at the same time (without Interpol interceding). Meanwhile, Meg and Ruby Rotten Roo went on a secret mission…more on that later:)
C)Head of Neuro continues to be at the top of his game: A month or so ago he kind of rejected the idea of completing the heartworm treatment protocol as planned out and suggested we may want to wait… EmmaRose bought him a card which said ” Do one thing each day that scares you” ( Eleanor Roosevelt). EmmaRose then received her treatment and has ONE MORE to go! All of her bloodwork including her thyroid panel came back NORMAL:)And, EmmaRose and CharlieBear go to the Vet School as a pair and CharlieBear gets to be with EmmaRose the ENTIRE time (which works well for him as it is air conditioned there;) Head of Neuro has been an absolute gem about it all. EmmaRose is now 15 years young.
D) CharlieBear continues to use his leg when not pancaking. Who would have thunk it?
E) Ruby Rotten Roo continues to be impossible. Currently the yard has clover which she insists is grown and picked for her. Found several four leaf clovers- most of them were then consequently eaten by her…She has also taken to reading about the Embroidered Bunny;)

Thank you EVERYONE for checking in on Da Bear HQ! It TRULY means the world to us. You are all DA BEST! Best wishes, huge hugs, and Pyr Paws ALL AROUND!!! And, all paws crossed, will be back sooner rather than later unless the Ruby Rotten Roo chews through the Internet cable again…

SOOOOO GLAD TO HEAR FROM ALL AT DABEARS HQ!!! 🙂 Knowing everyone is doing wellmis always uplofitng! 🙂

It certainly sounds like Ruby Rotten Roo has been a bit naughty going around chewing things she shouldn’t! 🙂

Can’t wait to hear what Ruby Rotten Roo and Meg are up too!

And I love the card EmmaRose gave the Vet! Looks like that was just the dose of courage he needed to give her the injection! That EmmaRose is one strong broad!!

And thanks for joining in on cursing out the low life, scum bucket, piece of s**t, soul killing, mutilater of treasured memories photofubucket!

Love to all the pack!

Soooo good to hear from you, CharlieBear. The world feels slightly off its axis when Ruby Rotten Roo shuts down DaBear HQ comms.

I love the fact that CharlieBear is accompanying EmmaRose to her appointments. That Head of Neuro sounds seriously in tune with the needs of DaBears, other than the purely physical. VERY important. Big pat for Head of Neuro from the MegaGang and a tummy rub too. Emma Rose is one indomitable dame, and CharlieBear her perfect gentleman companion.

Love to all at DaBear HQ from all of us here at Pie Palace.

Wheeeeee! Thanks for the nudge Clare, I’m so hoppy to hear that all is well at Da Bear HQ!

Well they say no news is good news but that doesn’t apply from DaBears headquarters!  We have to get our ” Bears and Roo” fix!

Incoming Pictures from the HQ:)

CharlieBear (“My Mom is Silly”)

“EmmaRose Let Me At Em”

BOY OH BOY!! WE SURE NEEDED THESE DEEEEEELIGHTFUL PICTURES TO MAKE US SMILE!!!! 🙂 🙂 🙂 🙂 Thank you so much for posting these Holly 🙂

Loooooove these mug close ups!!! Cuddling and smooching them through the screen!! 🙂 Sweeeet photos!! Happy, happy dogs….zonked or not!!! Dennis Quaid??? BRILLIANT!! 🙂

The HQ pictures would not be complete without the RubyRoo;)

The cutest dang bunny ever

RubyRoo is soooo beautiful!! Thanks for the post Holly!