As we approach the anniversary of that day ... I'm trying to clean out my office. And I have a binder with all of the receipts from every one of Rocky's vet visits. Starting in September of 09 all the way through to the oncologist visits post-amputation. I've always had a tough time throwing stuff related to Rocky out, but I'm thinking it may be time to toss these. Although, I came across the one from September of 2010 when we went to the emergency vet after he ate a full plate of chicken bones; I may need to keep that one since that makes me laugh now.

I already have his final tennis ball, one of his beds (Baxter inherited two of his newer beds) and some other stuff. Not sure why I need to keep receipts. Especially when some aren't very happy (like his cancer diagnosis).

Changing subjects, Tigger is apparently out of the socks now. He learned how to take them off and I think my parents gave up on putting them back on.

And last, but not least: 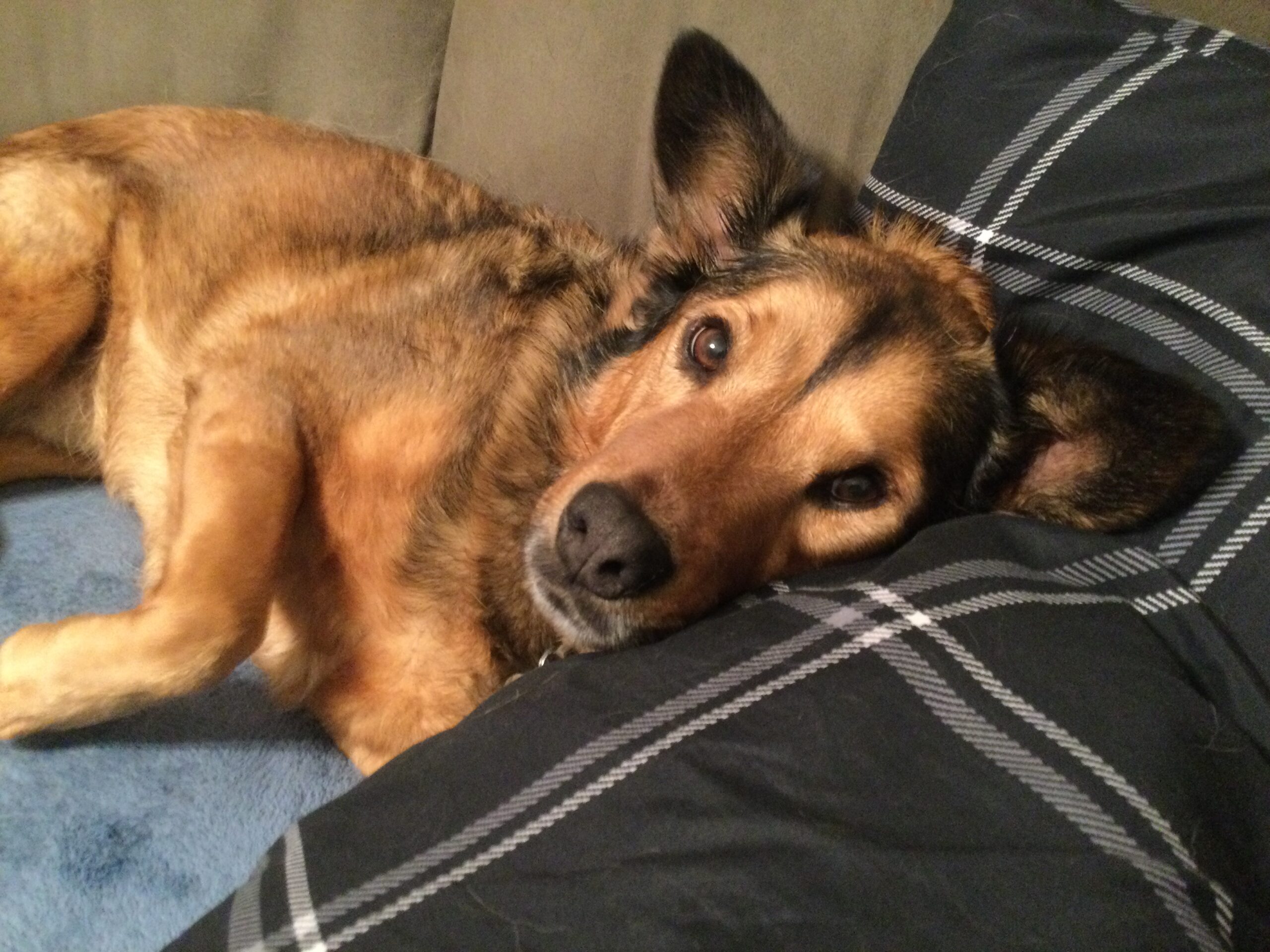 Baxter.. so handsome!  I totally understand the difficulty of getting rid of things. I still use the old scoop that Rosie chewed when I wasn't looking, lol. I have all of the receipts, leashes, collars, some toys.. I get it. I did eventually let Bo ravage a few toys, lol.

I love that smoochable Baxter fluffy face.. Please give him a smooch on that adorable cheek for me

Smoochable face indeed!  He looks so content.  Such a gentle voy....unless a squirrel comes around!

OMD!  The story about Rocky eating the chicken bones, too funny.  I mean, it wasn funny at the time, but you can just imagine  how Happy he was with every single chomp. chomp!!

A member said one time whenm8t came to "getting rid of things", she decided anything  related to the piece of crap disease that made her sad, she dumped. Anything that made her smile, she kept.

You know David, I still have quite a few of Jerry's receipts left, and certainly all of Wyatt's since we didn't lose him that long ago. I don't know why I keep them either. Maybe we should have a group receipt burning ceremony during our next Tripawds Group Hug call?!

I have e every single receipt of Nitro's, starting with his purchase price, and I have no thought of getting rid of them. As I came on to comment, Nitro's banner came up...I think he agrees!

Oh my gosh Paula that is a riot! I wonder how many other pet parents out there keep them too?

Good to know I'm not the only one who kept them.

But I emptied the binder and put them all in a trash bag in my office (well, except for the chicken bone one and the one before his biopsy since it has his picture ... also kept the prescription form from Walgreens that says "Tramadol for Rocky Dog." I haven't actually taken the trash out yet, but I think I'm going to dump them this week.

I still have one Frosty Paw sitting in the freezer from four years ago too. I had bought a box of four with the plan of giving Rocky one each night over the holiday weekend; and he never got the last one. That may stay in the freezer for a while longer.

Ok... truth be told.  When I left the animal hospital to move on to"human medicine" and decided to move to Ky, i took Rosie's whole medical file with me... with their permission,  of course.  I've read the story.  Several times. About how she came in as a hit by car stray.  I actually wrote a lot of it as a tech.  Before i became her mom.  That's not going anywhere... just saying.  So.. I'm a crazy cat lady AND a crazy dog lady lol. My heart smiles and cries simultaneously.  It's ok. When i cross the bridge and see my pack and pride,  somebody will probably toss it all but by then it won't matter ❤

Well, you have to do what makes you feel better, that's what counts. If getting rid of the receipts helps, do it.

I think if I held onto the Frosty Paws I would bawl every time I opened the freezer. You are stronger than me. When we were setting Wyatt free, he didn't get to finish his last cookie. Part of me wanted to keep it, the cookie was a really beautiful fancy one from a doggie bakery, but I couldn't keep it, I just felt like it was too much to hang onto. We all have our different ways of coping and making sense of saying goodbye.

Jackie that's a such a sweet story. To be able to read your notes before you totally fell in love with Rosie and became her Mom, what a treasure.

Crazy dog and cat ladies and gents are the best people in my book!

I can't remember if I've posted this or not, but I'm going to brag for a minute about Baxter and his intelligence.

So when we're watching TV, if he sees another dog (or any animal, really) he jumps off the couch and runs to the TV barking. I think he actually watches TV with me. It gets better.

There's a Pedigree commercial that begins with a girl in a hospital bed. A nurse comes in and the the girl says "more treatment?" before the nurse says they're going to try something different and lets a dog into the room. The first few times that commercial came on, Baxter would jump off the couch when he saw the dog. Now, when he hears the girl say "more treatment?" he knows what's coming and jumps off the couch to go see the dog, before it even comes on screen.

Just now, we're in my office with the TV in the other room. That commercial came on and when he heard the girl he ran out of the room to go to the TV. Pretty amazing.

I'm familiar  with that commercial.  For him to  not only recognize the dog by sight (he's not barking in that scene),  but then to recognize the spoken word....while in another room!!!

That is super cool!! He just proves once again that dogs are so smart! Maybe he's trying to tell you he wants to be a dog actor too?

I'm a day late, but yesterday was the four-year anniversary of Baxter's Gotcha Day. Time flies. I've now had Baxter half as long as I had Rocky, which is unbelievable.

We've been busy this fall. On Halloween, Baxter somehow tore his dew claw (yup, the same one) again. The vet said it's probably more susceptible  to tearing now and probably something we'll just have to deal with. Fortunately, it came out pretty easily again, although Baxter wasn't happy that Dad left the room when they yanked it out.

Baxter also got a job. In early October, I discovered a chipmunk had been crawling up the corner piece of my vinyl siding. I'm not sure if he's just getting under the vinyl or of he's actually chewed his way into the walls. My pest control guy put some sort of steel mesh at the entry points of the corner piece to hopefully keep him out, but I tasked Baxter with catching that little nuisance. He came close several times, but has yet to catch him. Although I haven't seen him in a couple of weeks now, so I'm not sure if the chipmunk went into hiding or if the neighbor's cat got him.

Anyway, to celebrate Baxter's Adoption Day, here are some photos, including one of of the chipmunk hiding from Baxter on top of my hedge. Hope everyone is doing well and has a great Thanksgiving. 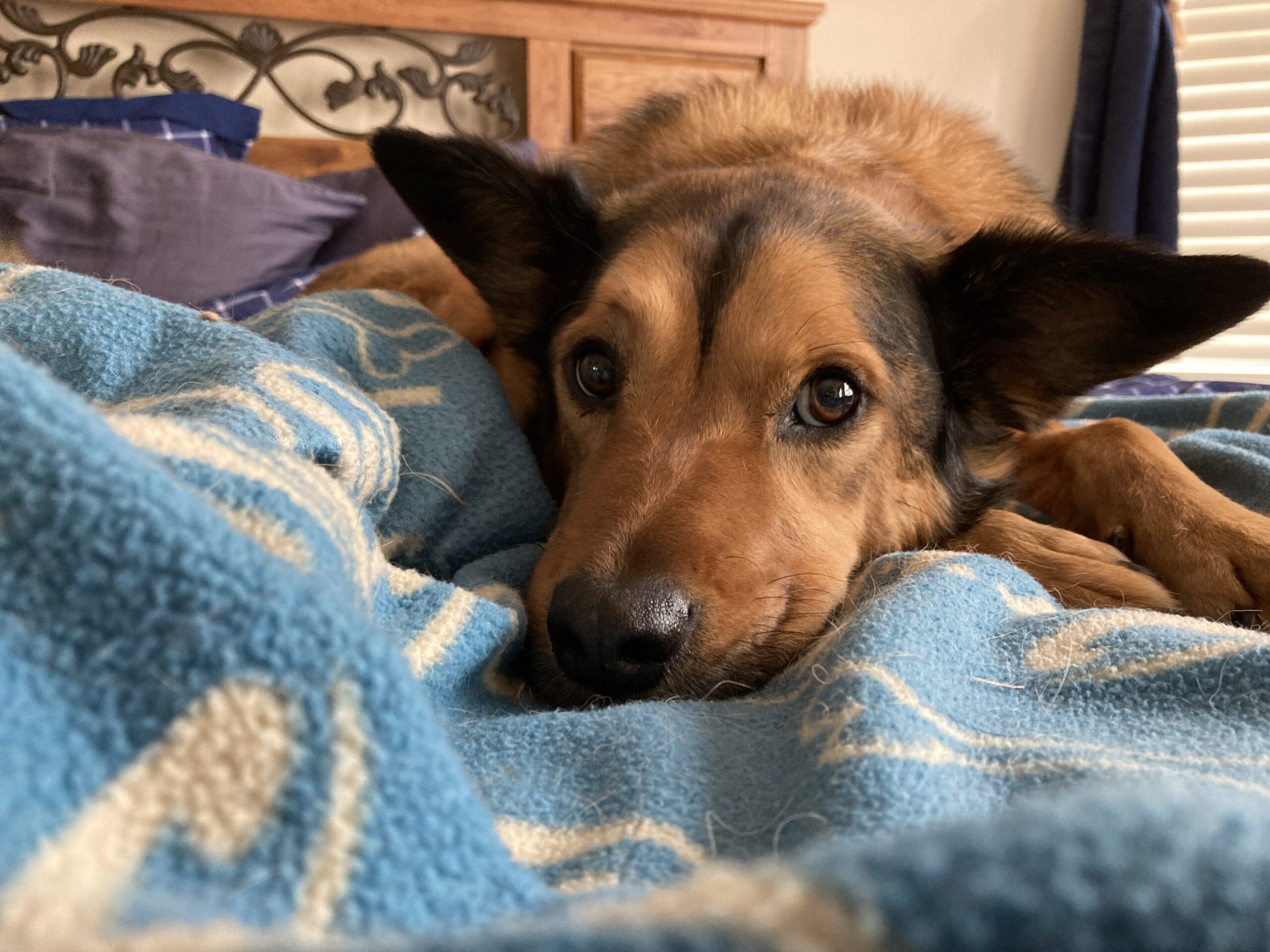 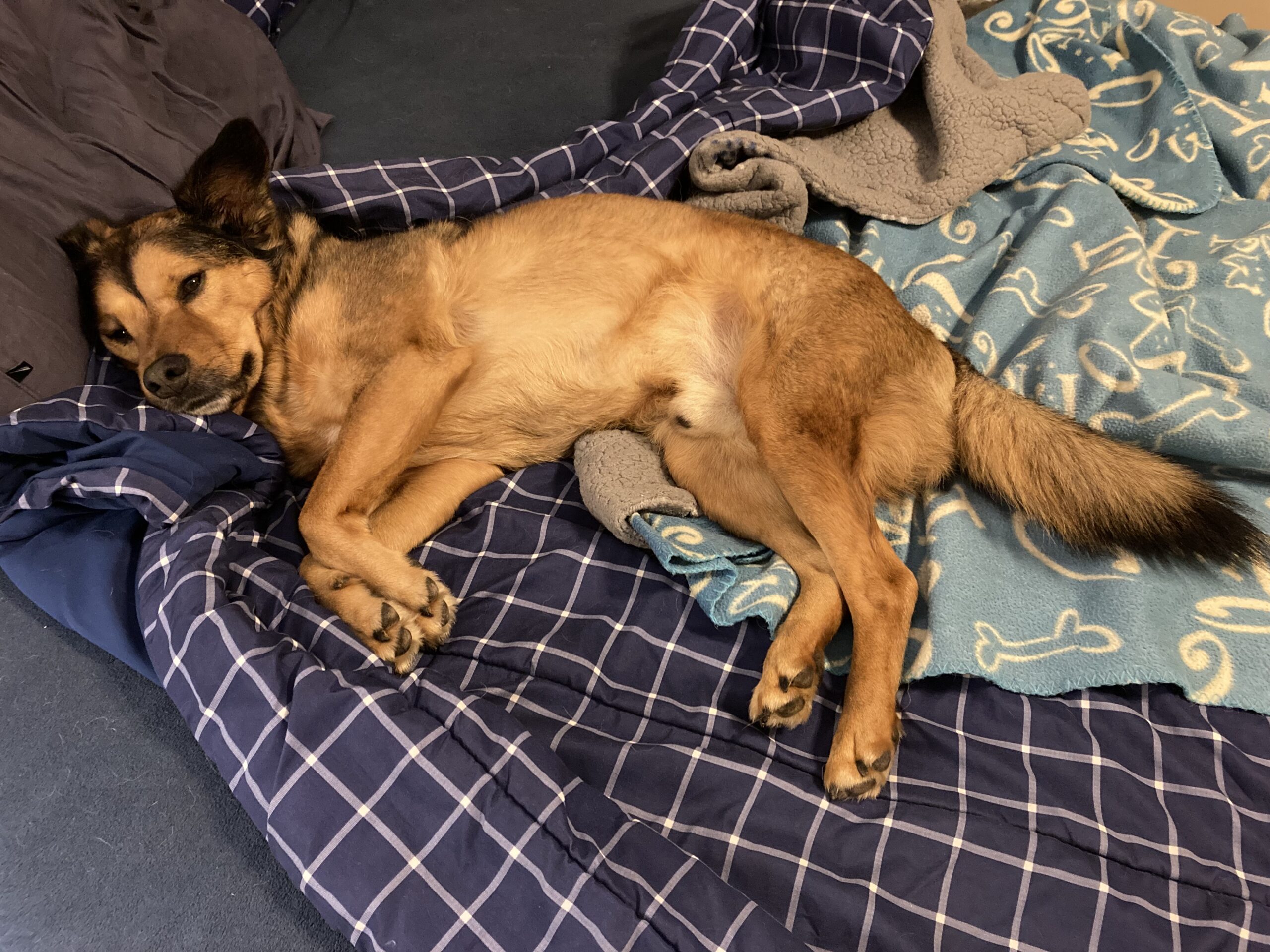 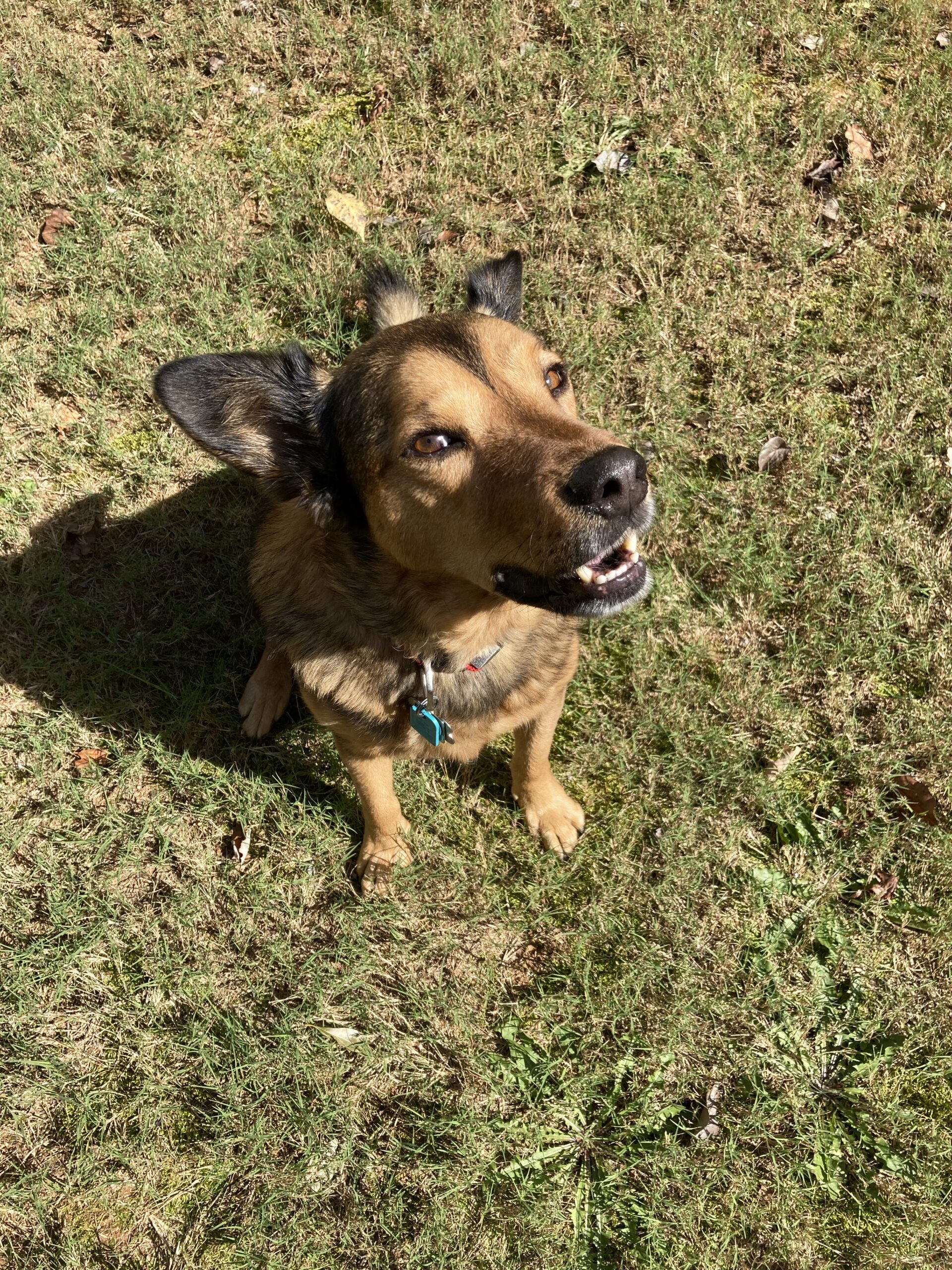 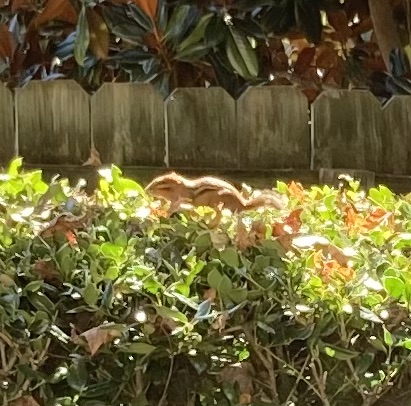 Awwww Baxter! FOUR YEARS? YIKES! I can't believe it's been that long either.

What fun it's been to watch Baxter settle in and live the good life with you. I hope you get that skwirell, dude! Grrr!

Happy Thanksgiving David, Baxter, and family! We are so grateful that you remain part of our community and share the highs and lows....that dew claw again? yikes!. It's beautiful for everyone to see how it's possible to get through grief, and that our Tripawd Angels like Rocky are still watching out for us every single day.

I still thinkmofBaxter as being fairly "new" here and to you.  FOUR YEARS??  Truly unbelievable!  We've so enjoyed following his journey....except for that darn dew claw thing again.

Okay, guess I'm the only one cheering dor the Chpmunk, so I'll move away from that and back onto how ADORABLE  Baxter looks in the photos!

I still ,marvel at Baxter watching  the Pedegree commercial.   He's such a smart doggy.

And the one of him looking up at you and the camera..such a sweet, sweet face.  His eyes are so gentle looking

And we thank Rocky for sending Baxter to you...to us....♥️