Roane lives on thru Autumn's Angels

Something clicked when I read in Bev's signature  that Roane shed her earth clothes  on the first day of Fall.  The day summer flows effortlessly  jnto Autumn.

My Happy Hannah became one of the "founding" members of  APRIL'S ANGELS along  with all the other beloved members who transitioned that month, a couple within a very, very short time of each other.  It was, indeed, an "Awful April".  But we needed to make it a beautiful celebration  of beautiful Souls, and "awful" just didn't  do them justice.   Thus, APRIL'S ANGELS  joined each other that month at The Rainbow Bridge with wagging tails and happy hearts❤

And when we had several members  cross over in  the month of September, we needed to celebrate their earth lives in a way that honored them.  Thus, when Rocky headed to the Bridge that month to join the others, his Dad, David, agreed that SEPTEMBER  SAINTS was a great way to honor those special Souls.

And now we come to Roane and AUTUMN'S ANGELS❤  I emailed Bev and asked if we could have Roane be one of the "founding  members" of AUTUM'S ANGELS.to hinor thise who transitioned  during this time.

I hope Bev doesn't  mind, but I'll copy some of her lovely response here.

"I'm a big believer in signs so when I read your email I had a wow moment. when I made the appointment to let Roane go I didn't realize till latter that I had scheduled it on the first day of autumn. to me it just seemed right. I have an eclectic belief system so autumn is celebrated as the time when the goddess takes things back to the earth to rest and be reborn again later. your message totally echoed that!

I love the idea of Autumns Angels, something about it just strikes me as beautiful and right. I would be honored to think of Roane as one of the founding members. If it gives even a little bit of comfort to other autumn angels I'm all in."

Thank you Roane and Bev!   Thank you for allowing us to honor your beautiful  Roane this way, and all future and past Angels of Autumn💖💖💖

Yes,  tears flowing.  That is so beautiful and so touching.  And so fitting.

I cant tell you how much this touched my heart ❤ and how much comfort it gives me. (Happy tears!)

I had been thinking that i needed to find the perfect way to celebrate Roanes life but her loss was still so new i couldnt find the proper words. And then i got a beautiful email about autumns angels. 🐾❤ Sometimes life just knows what you need.

Thank you all so much for all the love and support on our journey and for giving me a way to celebrate my big, beautiful, furry soul mate. Roane loved autumn. it ment all kinds of special doggy fun. Nice cool weather, extra time outside with mom, squirrels to chase, leaves to lay in and happy sticks to chew! I picture her at the bridge rolling in the leaves with the other angels❤

Awww your sweet girl is such a beautiful Autumn Angel. Sally this is so perfect! What a beautiful way to start my day. I can see her romping in the leaves and enjoying the season! Fall is so much kinder on all animals but especially gentle giants like her!

I'm no graphic artist but when I saw this discussion I thought of a photo I took last Fall in Leadville Colorado. It had Roane's beauty all over it. 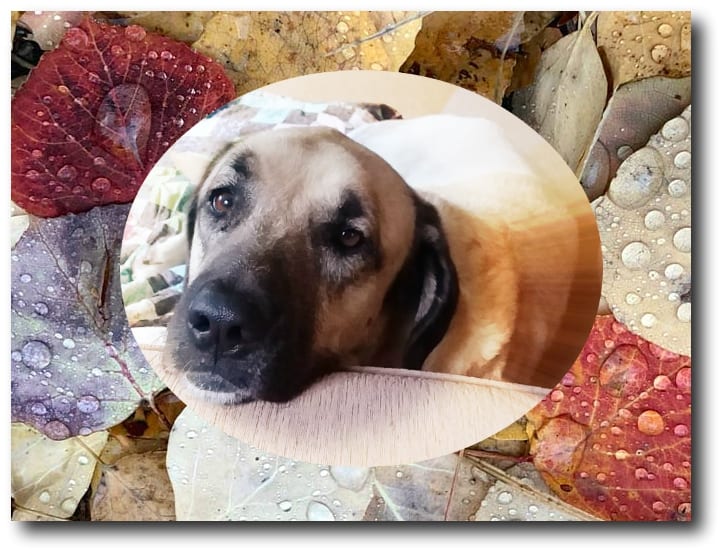 That is beautiful!! She is going to love that, what a wonderful idea

You guys are so awesome, that is just perfect

I cannot think of a sweeter way to pay tribute.

Omd! I cant even begin to express how much i LOVE this photo and this post! Thank you so much sally and rene for putting this together!

Thank you with all of my heart for giving her a special place here!