If there was EVER a dog that was wrongly named, that would be Leo.  My little brother (in age only, he's over 6 feet tall and knocking on 40) was obsessed with the movie "The 300" when it came out and that is how Leo got his name.  If he was born in Sparta, they would have left him out on the rocks.

My step-mom Rene decided she was going to breed Japanese Chins.  I'm not sure why, I just remember saying ok and thinking that this seems like a bad idea.  She bought Quibbs and then Bella.  Quibbs was the gateway chin and she may have brought him home first and he was the inspiration for breeding them.  I cannot stress what a cool dog Quibbs was.  Not exactly the smartest dog you've ever met but fun.  Quibbs and Bella created 2 litters.  1 puppy in the first one and 2 puppies in the second litter.  They stayed with my parents.   Leo and Achilles were in the second litter.  Achilles was beautiful and loved people.  Leo was always timid and leaned on his brother quite a bit.  Sadly Achilles ate  Sago Palm and died.

Without his brother, Leo was alone.  He got even more shy and Rene kept buying and breeding more chins.  Eventually they had 22 dogs.  Rene had severe OCD and was bi-polar, mostly maniac, so the house stayed clean and she was a barber so keeping the dogs bathed and trimmed up was no big deal for someone who never rested.  If I had known how things were going to turn out, I would have been more involved with the chins then but it was pretty overwhelming going to visit because Takera (Googly Eyes) and Rogue (Lawn Dart) would mob you and demand all of the attention.  And if you thought you were just going to sit down, both girls would come flying up into your lap without even checking to see if you wanted a lap dog.  You had one.  Quibbs, Bella, and lil' Larry also would get some attention.  Leo hid under the kitchen table or under the porch.  He didn't do people.

As he became more shy, the rest of the dogs would just exclude him from everything.  He is deformed and is the poster child for why backyard breeding is wrong.  2 pet quality chins being bred together is bad.  He has scoliosis, luxating patellas in both hind legs, extra weird range of motion in his front legs, too much flesh in his ears that causes infections and makes him hard of hearing, screwed up sinuses, multiple signs of dwarfism, and an adorable underbite with summer teeth (Some are here, some are there).  I know things are serious when he shows me all of his teeth.   Apparently showing teeth is a male chin trait.

My step-mom got a rare skin cancer and died in 2012.  Before she died, she downsized to 10 dogs because she didn't think my dad could handle 22 dogs.  She was right.  It was a really rough transition for my dad but he eventually agreed that it was the right thing to do.  In 2020, my dad was diagnosed with Hep C and he passed away on may 5.  Six dogs were still alive.  Leo and Quibbs were in bad, bad shape.  My uncle, who knows nothing about dogs, was taking care of them while my dad was trying to get treatment.  My siblings and I were all able to be with my dad in his final days and we all got pretty attached to the dogs.  I brought home Leo and Quibbs because they were the sickest.  We gave the older brother the healthiest one because he had younger kids.  My sister Amber took the remaining three - Bella, Lawn Dart and Googly Eyes.   Lawn Dart can still counter surf somehow even though she's over 12.

I wasn't expecting either dog to live more than 3 months.  Quibbs had CHF with a grade six heart murmur.  I didn't know they went past 4.  You could actually hear it and feel it by being near him.  It was bad but he was tough as nails.  As we were driving home from the ER when they started him on the heart meds, he insisted he had to sit on my lap and play with the buttons on the door.  He liked to lock and unlock the car and roll the window down.  I've got pictures of this.  He did great on the meds and was even doing chin spins.  He loved Rich.  Just loved him.  When he felt Rich was done working for the day, he would force him to come out and play.  The boy was 14 and just so full of energy.  He got along great with Will which was hilarious to watch.  Quibbs would beat Leo up every day multiple times a day for reasons unknown.  Leo is pretty adept to falling down and face planting with all of his deformities.

We lost Quibbs to a bladder stone that was inoperable due to his congestive heart failure and his kidney's were shutting down.  We couldn't treat the kidneys because of his CHF.  He couldn't have surgery because of his heart.  It was a rough night.  We had just lost Will a couple of weeks before.  Now little Leo was all by himself.

Suddenly Leo and I started to bond really tight.  Really tight.  I write a lot of letters and cards so he would come to the post office with me each morning and somehow that turned into going to McDonald's each morning.  He likes breakfast burritos a lot.  Where Quibbs was 9 lbs of attitude, cool hair, and just fun, Leo was 14 lbs of long flowing hair and looks like a drunk Dr. Seuss character.   He didn't like people.  He scowls at Rich.  He has a special talent when he's really upset and it sounds like he's summoning demons.  The rest of the time he makes very cute little noises like Gizmo from Gremlins.  Can you tell I am in love?

So when I picked out Allen, we had to make sure he was going to see Leo as a dog.  He did.  Allen completely defers to Leo on how to be a dog.  This is a horrible thing to do!  Leo has no clue how to dog.  He knows how to manipulate me and demand cheeseburgers from McDonalds but he's not capable of teaching a dog how to dog.  Leo also decided to treat Allen (87 lbs) like his dad treated him.  Leo can't roll Allen or pin him but Allen has had to run through the house for his life while being bit/gummed by Leo because he made the mistake of asking Leo to play.

Leo has had some health challenges that require him to get daily Sub Q fluids for his kidney's.  If you were to see his CBC, you'd ask how is this dog alive?   We don't know, we don't care.  He's living his best life, he's spoiled rotten, and he'll be 14 on June 3.  We discovered he likes camping.  I'll have to post the picture of us kayaking last year.  He sat in my lap, making me lean WAY back, with his paws crossed like he was the captain of the ship.  ROW WELL HUMAN AND LIVE.  I told Rich we shouldn't let him watch Ben Hur.

He sits on the couch with us each night to watch tv.  When I let him sleep in our bed, he stretches out and sleeps hard.  When I go to wake him, he stretches, lifts his head up, yawns, and then slumps back in a heap.  Every time.  I spoil him.  He endures a lot but he's found his inner diva and just keeps pressing on.  He went into kidney failure after getting a lepto vaccine.  I didn't know that was a possible side effect.  He had never spent more than a day at the vet and I had to hospitalize him for 5 days to get him over the acute failure.   I had no idea how he was going to handle this but he did well.  He still is interested in food - just not the prescription kidney food.  He lives on plain cheeseburgers with no bun, fried chicken with no skin, and anything else he wants to eat.  I have to give him aluminum hydroxide every night.  He goes through phases about what foods are good and what ones aren't.  Tonight he ate dog food.  The vet said to just let him eat what he'll eat and just be happy for every day I get.  I am.

Awww bravo! You have the most amazing way with words, especially when it comes to the life you share with your dogs. What a great story! All the love you gave to these dogs after your father passed (I'm so sorry!), speaks volumes about how much compassion and kindness runs through your family. Thank you so much for sharing, and giving Leo

What's a Japanese Chin look like? I'm clueless! We must have photos, it would be fun to see Leo and Allen together!

This made my day. Thanks again. 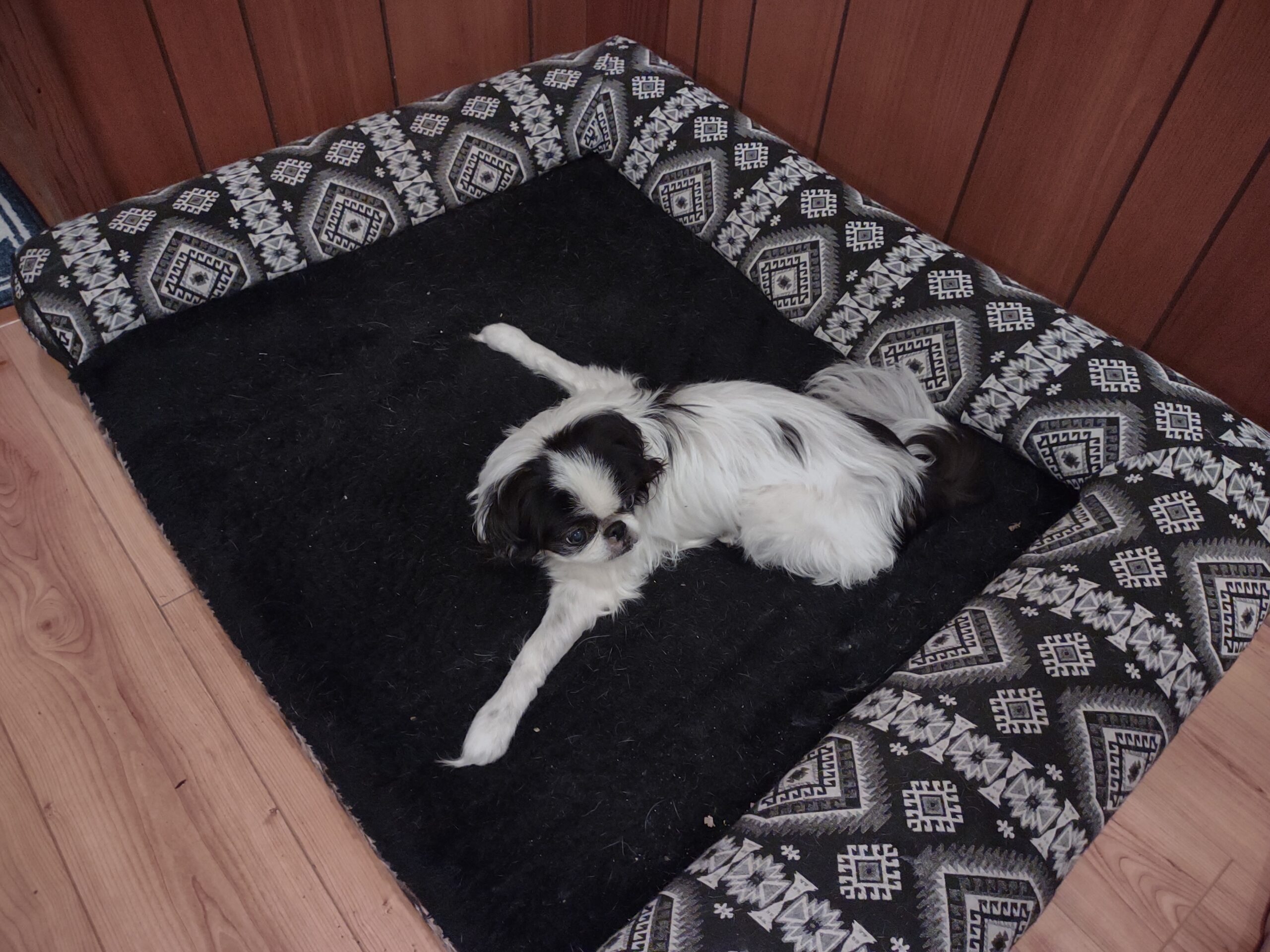 Walton is always near Leo in case he drops some food 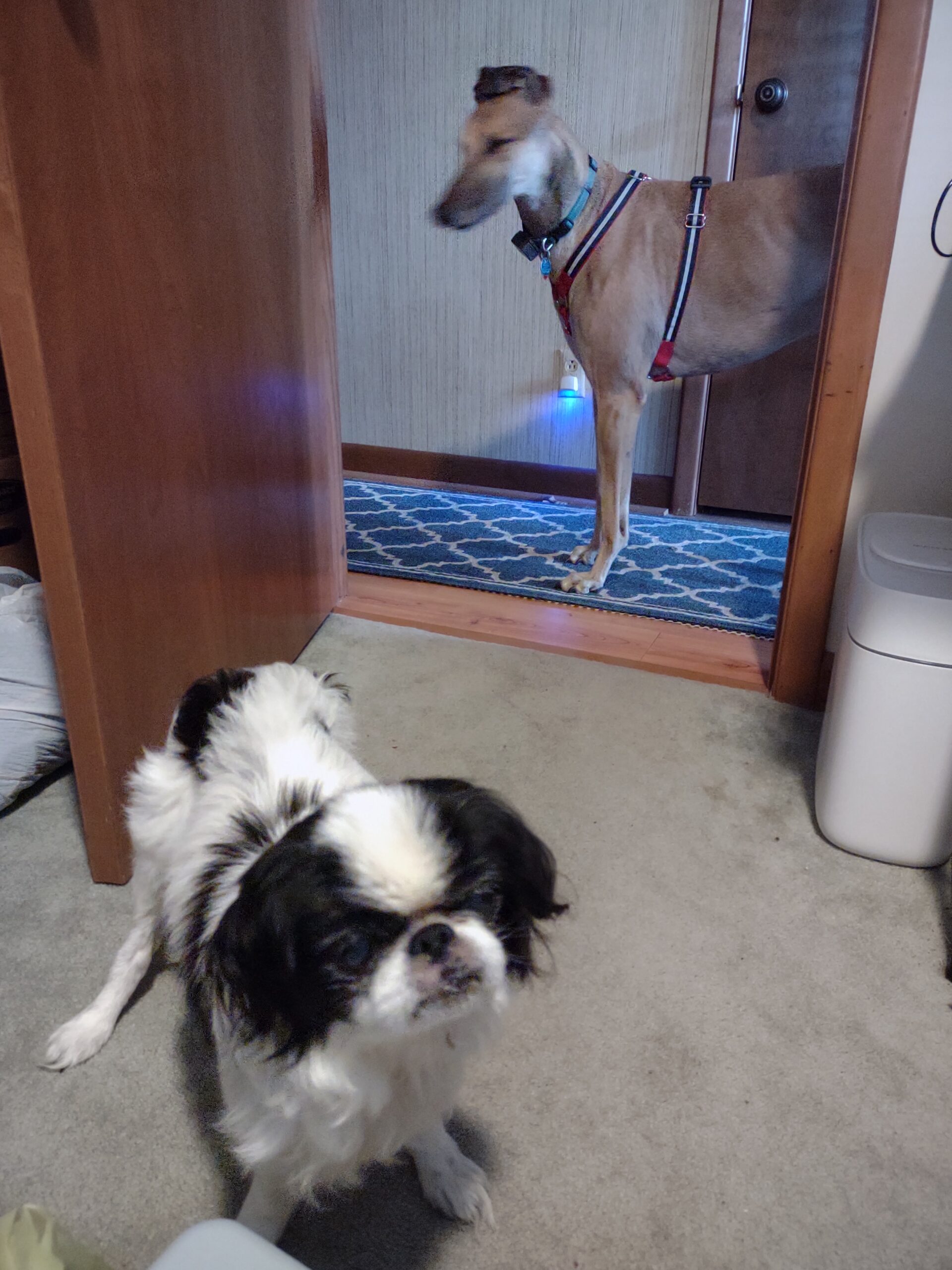 Cruising for bitches at Tractor supply 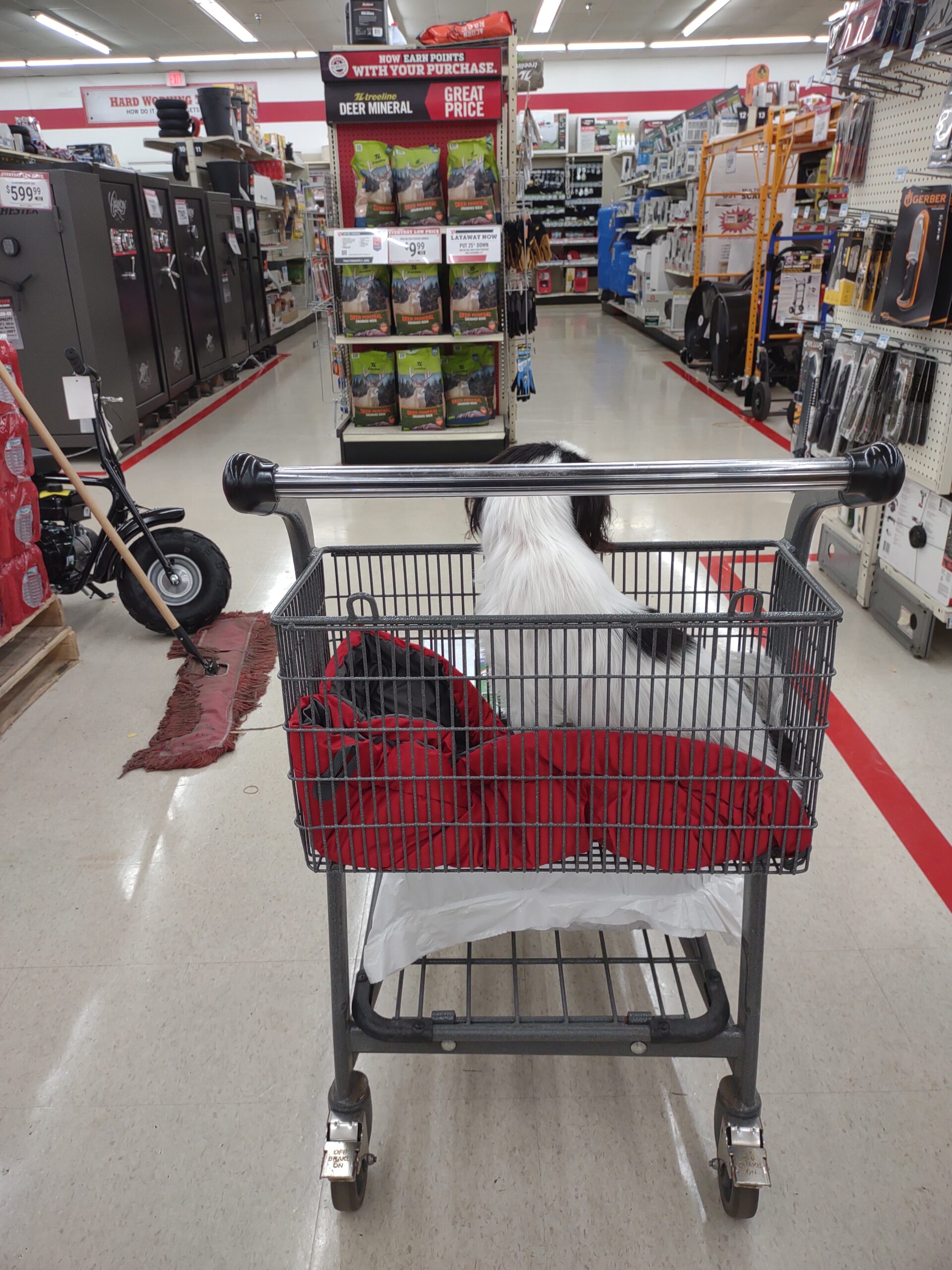 My dad drove a Ford transit.  Leo freaks out and tries to go home with our electrician every time he sees the white van. 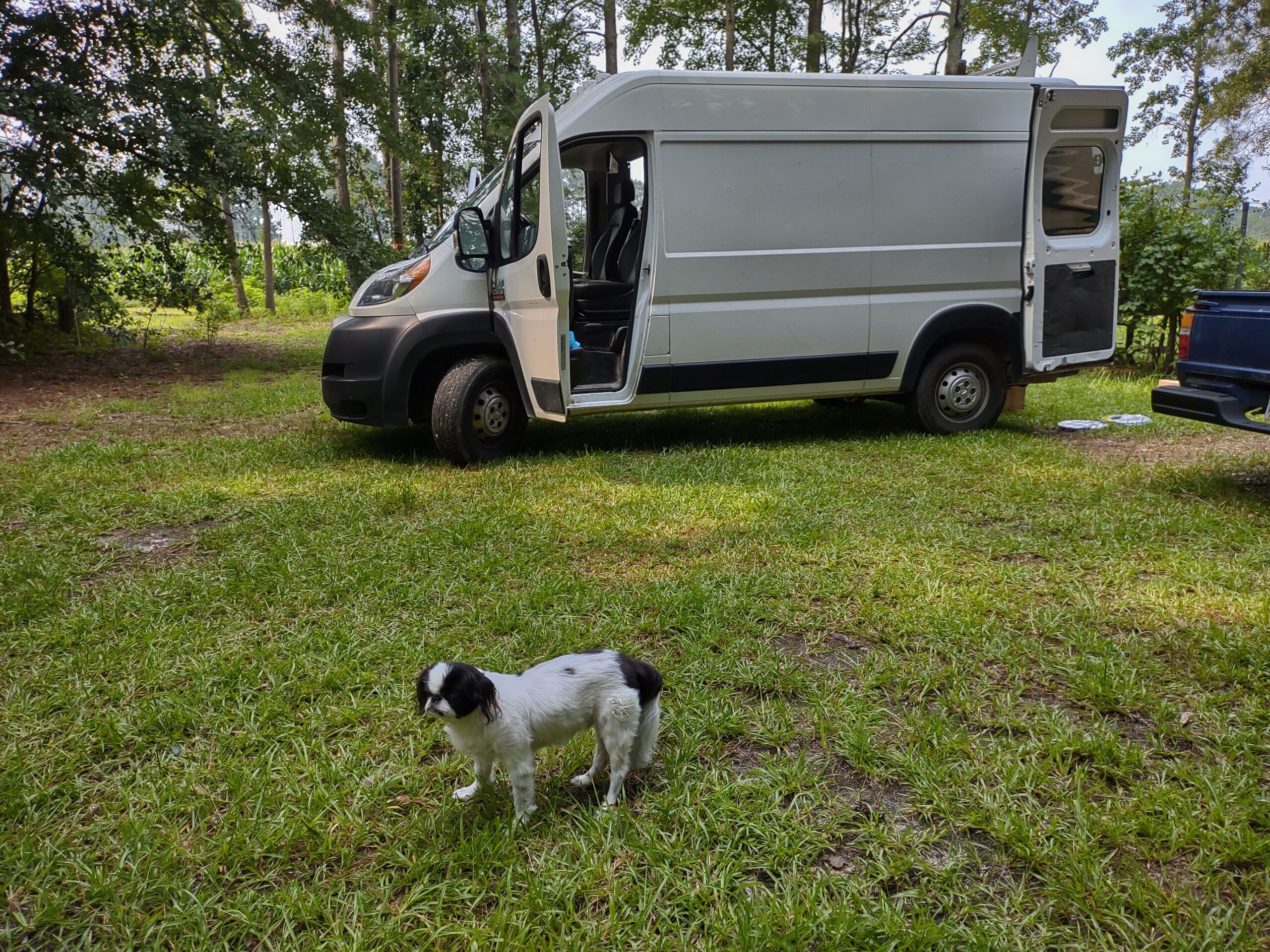 Just saw this and was riveted to every word!   I agree wholeheartedly with Jerry you have a brilliant way with words.

Reading about the children of Quibbs and Bella..what a handful!  I twas fun getting to know everyone, esecially Quibbs.  Definitely  a tough dog who lived full in site of heart issues. Naughty  that he would pick on sweet Leo though.

I can onlyiafine the group pf dogs  waiting to greet your Dad at The Rainbow Bridge !  Quite the reunion!

You always educate add wisdom and humor to your posts.   Thank you

And the pictures....wonderful!!  Love that Leo goes shoping for bitches🤣😜😂

Ah! ADORABLE! Leo appears to be in command and ready to take charge wherever he goes. Thanks for the smiles!