You just need a blog for photos Sally;) You don't have to blog , just store your photos there!

Exactly. And you get Admin Guy for tech support too 🙂

Storage limits for Tripawds blogs are listed on the Tripawds About Page and shown below.

HOLLY! Thanks so much for posting the pics of the Baby Vs 🙂 🙂 And thanks to you and Jerry for the tips on transferring pocs from photofubucket to store in a blog here. And then I can embed them in posts'a d I don't have to blog! SWEET 🙂

Okay...back to the Baby Vultures!

I think I ALMOST captured them eating. For thr first time zi heard the Mom/,Dad "talking" to them in the shed. It was sort of short raspy hissing sounds. So I peeked in and the Mom/Dad flew up to the rafters. The babies stood there and showed me their very shiny wet looking beaks C@ear@y they had just been fed.

You can really see the difference in Vivian and Valentino in the video. From the day they were hatched, one has always been a little larger than the other. Anywyay, the larger one (the one who doesn't try and hide but stands there posing for the camera) still has a lot of "fluffy downy" around his head. The smaller one has head feathers filling in. nicely. I really have fallen in love with these two.

!
The baby Vultures need a napkin!:

Yes exactly Sally! The pictures would never be held hostage that way!!

I see the wet beaks BLAH

I know you will be sad to see them go! I would get attached too! However the wet beak and the feeding I would have to pass on! They do a great service!!  Purrkins is not sure what to make about the hissing/growl sound either:) Love seeing these guys grow! Get a blog going so we can see the pictures you took:) It will be a joy for us all to see you leave the photofubucket!

So yesterday early afternoon, Frankie has a bit of a change in his voice...he's a "howler", but he did a "bark" Frankie style. Then Merry Myrtle did her deep RRRWOOF..

I ran outside to see them standing over Valentino. Valentino, on the ground, wings spread, head turned in odd position.....me saying "nooo, nooo, please....nooooo....back, get back dogs!! Cookie! Cookie! Myrtle steps back looking for a cookie. Frankie, not interested. Move inbetween Frankie and Valentino. Frankie fusses at me a d tells me to step away from his Vulture. I fuss at him and pick up a stick for emphasis. Of course, the stick means NOTHING to him because he's never benn "hit" with one or anything. So we continue with our stand-off fussing with each other. I continue to step into his "space" and ooch him away from Valentino.

Finally he steps away and I herd Frankie and Myrtle back into the house. Valentino.....not moving....

As I get closer I'm talking to him, seeing hes's breathing. I assure him it's just me.......he STANDS!!! HE'S ALIVE!!! How bad is it? My mind's racing!! To get this far and for this to happen? Freaking out on inside!! I don't see blood...his beak looks okay...wings...what about his wings? I jave a towel and I'm getting ready to wrap him in a towel and he flaps his wings! Good sign!! I pick him up and take him out of the dog yard and put him back in his " ursery". He steps right out towards Vivian quite relieved to be back...I think!

He may have been thinking he could not believe I out him back after he FINALLY was able to fly up and out of the shed!!!

Soooooo......long story short.....he flew his spunky self out of the Nursery again sometime early this morning! I've looked and looked and am hopinb he is very, very safe somewhere near his parents. Have not seen them or him..

Vivian is still in her nursery this afternoon. We shall see if she gets out in the next day or so. She's so much smaller.

Oh...And the dogs do NOT go out without me checking the yard thoroughly first!!

I sooooo hope he is safe......soooo hope he has a good life as nature intended. I miss him!!

I am sure he is ok Sally.  He probably flew to wherever and is watching at a safe distance.  Just keep an eye out for the other baby to leave too.

I haven't been on for quite awhile, but I loved reading about your adventures with your "cute" baby vultures 🙂 Valentino is soooo smart-I loved the play by play description of what happened. I was holding my breath and hoping...what a smart bird

Glad that all is well and there was a happy ending!!!

Joan and her angel, Lily

She made the big flight up and out just in the wrong area;) I’m surprised Mom and Dad were not lurking!!

I am glad to hear she/he is ok!! I would of been exactly the same!! Panic and always bring a towel with birds;) I have rescued several of our wild creatures here too!

Of course your going to miss them!! I do think they will be around for a bit & will return next year. Don't you wish you could band them, so you know it is them!! Have you seen them since?

I took a picture that was a first for me...I have the pawrents "together" sitting on fence posts about 8' to 10' apart. Pretty special. (Of course, can't post it through photofuvucket) They were both taking turns gping to their "water source"...a bucket of water I keep out for them and all the "drop-off" cats...and racoons...and possums....etc 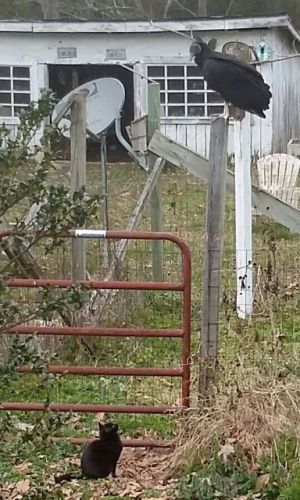 Fot Frankie and Merry Myrtle and ice cream cone, somoffered some to the Baby Vultures....not too interested.  Guess it's not something that would find in the side of a road 🙂     Viv & Val Vulture..do you want ice cream cone:

Stay off the ground Valentino Vulture!:

VULTURES Vivian & Valentino side by side:

Wow, they have grown a lot since I last saw a video.   Amazing that they trust you still 🙂

You about lost a finger there with that Ice cream cone from Frankie & Myrtle.  🙂  Now I hope you had some Ice cream too

Ooooo... how cool is that. I am jealous. I would love to watch those guys grow up. Thanks for posting pictures

misterrustybucket
Minnesota
Member Since:
1 May 2017

I loved the video of Myrtle and Frankie sharing the ice cream cone 🍦 what beautiful babies you have. Ice cream is the best! I also enjoyed checking out your vultures. I don't know much about them except we had thes giant turkey vultures (that's what hey were called in Nashville) and one day one of them picked up Mister Rusty in our backyard and tried to fly off with him but his sister, my Lucy, went charging out and saved Rusty from being carried off. I'm sure your vultures would never do such a thing! Anyway I loved getting to watch all your loves.

thank you as always for your love and encouragement you are a pure and gracious soul,